"This is a ghost city, it feels weird," said Dr. Paulen. The halls at Washington University Medical Center in Seattle, Washington, where Paulen works, also became deserted. Non-essential employees are working from home, while visitors are restricted. 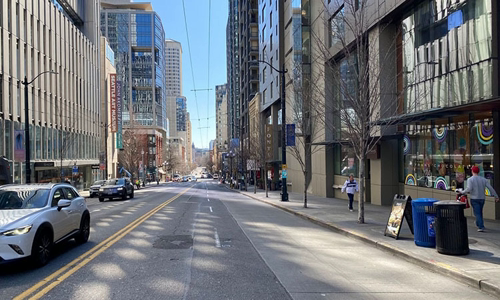 Before officials around the country imposed orders or recommendations to close businesses, Seattle, the first major US city to be attacked by Covid-19, had to take measures to deal with the pandemic. Some people predict the whole US landscape in the coming weeks may be similar to Seattle.

Office workers in the city have been working remotely for the past two weeks, making the buildings in the downtown area almost empty, except for the security and cleaning staff. Some cafes store entire tables and chairs to avoid people's attention.

Pioneer Square, the city's commercial center, is also littered with a few homeless people. Concerned about the risk of theft, shops closed with signs saying there was no cash left.

The Seattle metropolitan area, with nearly 4 million people, is the 11th largest US economic region and the third fastest growing nation in the country. Before Covid-19 broke out, the area was expanding rapidly thanks to the boom in technology, with the presence of large corporations such as Google, Microsoft, Facebook.

However, Seattle's momentum faced a series of barriers from Covid-19, when Washington State became one of the provinces most seriously affected by the pandemic, with more than 1,000 cases of nCoV and nearly 70 deaths. Businesses are now at a standstill. Many sluggish restaurants voluntarily closed before the government asked them to restrict orders on March 16.

Visitors no longer frequented the Pike Place market located along the city's famous Elliott Bay. The sellers said they also had to deliver products instead of selling directly as before.

Traci Calderon, owner of the Atrium Kitchen commercial kitchen, where people rent for cooking, organizing culinary classes or some events, said customers began to cancel their seats two weeks ago. Now, all booking schedules until July are no longer available. "Some people say they lost 70%, and I lost," Mrs. Calderon burst into tears.

Despite the epidemic, keeping Seattle residents indoors seems to be a difficult task for the government when there are no drastic measures. In addition, the concept of "essential" is extremely diverse.

Ian Sowle has been working from home for two weeks now. However, on 16/3 he decided to go to the city center. "I had to get a haircut before they closed this place for two months," the man said. At parks near the University of Washington, many people still walk and children play soccer.

Throughout the week, Julie Ramone and Nick Vukmer also worked in their one-bedroom apartment. The neighborhood becomes noisier than ever during the daytime, when residents work from home to take a break between hours.

"Last week we went to a cafe and it was packed," Ramone said, adding that she and Vukmer went skiing with friends over the weekend to escape the city. They also plan to continue jogging in the park near their home.

Katie Enarson, another Seattle resident, said she and her husband worked at home while caring for their four and six-year-old sons because the school was closed. They haven't been to a crowded place for more than a week, and they also ordered groceries and took them in person.

However, not everyone in the Enarson family can tolerate such mounds. Her husband's grandfather, who was over 80 years old, insisted on buying directly to be able to trade with the seller. Enarson's 68-year-old father last week interviewed for a job, even though he had pneumonia last year.

Enarson himself, who is trying to avoid most social contact, still takes his children to the park and lets them play football and basketball with the neighbors' children. She sets new rules for her children, like washing their hands before leaving home and returning, not going into other people's homes, not wrestling.

Other parents in the neighborhood also agree that they cannot leave their children completely separated. "Nobody knows exactly how to do everything. Nobody has ever experienced this," Enarson said.