Harry - Meghan can no longer use the title Prince and Princess, and their SussexRoyal brand fate is also unclear.

Buckingham Palace on January 18 released a statement saying that from the spring of 2020, the Duke and Duchess of Sussex will not use the royal title because it is no longer a senior member and no longer represents the Queen. This announcement is the official confirmation that Prince Harry and Princess Meghan have withdrawn from royal duties, initiating a series of changes. 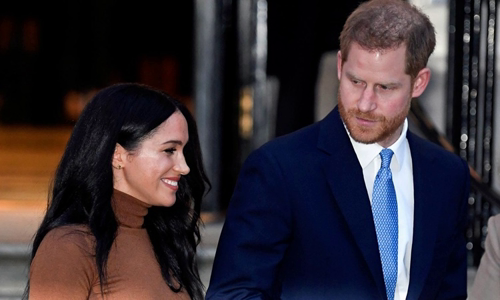 Harry - Meghan was in London on January 7 Photo: Reuters

First, although they no longer carry the title "Prince and Princess", Harry and Meghan are still Duke and Duchess of Sussex when starting a new life.

Observers believe that Harry and Meghan may have been prepared to give up the title after it became widely believed that their son, Archie, born May 6, 2019, was not given the title.

"The fact that Archie is not called the Earl of Dumbarton or the prince makes me wonder if this is part of a larger plan," said Joe Little, secretary of the editorial office of Majesty magazine.

Harry - Meghan once implied that they would spend most of their time in North America but keep the Frogmore Cottage as their home in England and will pay the rent.

British taxpayers paid more than $ 3.1 million to renovate Frogmore Cottage, the nationally-ranked conservation mansion that Harry and Meghan moved to live nine months ago, after leaving Kensington Palace. The couple agreed that they would return the cost of renovating the mansion to public funds.

Harry's absence of military titles and patronage after leaving the royal family is a great loss for the Duke of Sussex. One of the military titles that Prince Harry is proud of is the honorary commander-in-chief of the Royal Marines inherited from his grandfather, the Duke of Edinburgh, in December 2017.

Harry is also now deprived of the titles and other patronies he was awarded while serving in Afghanistan, including the Honorary Commander of the Royal Air Force Honington and the Commander-in of Small Ships and Diving.

One of the important roles that the Duke of Sussex has lost in agreement with Buckingham Palace is the Commonwealth Youth Ambassador, a position that requires many trips abroad.

Harry was appointed by Queen Elizabeth II in 2018 with the aim of helping young people use the "Commonwealth foundations" to address the social, economic and environmental challenges of their generation. are facing.

This is the work that Harry fervently pursues. Last year, he traveled to South Africa, Angola and Malawi to carry out diplomatic missions on this role. Prince Harry once considered this part of his job and his wife. In a speech in April 2018, the Duke of Sussex emphasized that he felt "extremely grateful" to be on a mission with Meghan, then his fiancée.

The role of youth ambassador is particularly important because of the demographic characteristics of the Commonwealth, with 60% of the population under 30 years old.

Despite withdrawing from their positions, Harry and Meghan remain chairman and vice president of the Queen's Commonwealth Fund.

Buckingham Palace did not comment on security measures for Harry and Meghan when they left the royal family, but experts expect the British public to pay the Duke and Duchess of Sussex protection fees for years to come. The couple can be targeted by terrorist groups, political fanatics or haters because they leave the royal family.

"We all don't want the situation where Harry and Meghan are pursued by paparazzi or people plotting without any protection. We need to make sure that the barrier is always at the the highest level, "commented Dai Davies, leader of the British Royal Guard between 1994 and 1998.

Ministers and police leaders are said to have been determined to avoid repeating the mistake that occurred with Princess Diana, who in 1993 refused police protection at all times, except when she was with her two sons. or at the Kensington Palace.

This made her dependent on private security forces. The night of the accident that killed Princess Diana, she was protected by Henri Paul, the leader of the Ritz Hotel.

The Duchess of Sussex, who has clearly expressed her intention to continue with women's empowerment, remains a patron of SmartWorks, a charity that provides clothing and advice to women who have The disadvantaged are looking for work.

Meghan is also still a patron of the National Theater, Mayhew animal charity and the Commonwealth University Association.

Prince Harry will continue his work with major charities, including Invictus Games and Sentebale, an organization dedicated to helping children with HIV in Lesotho and Botswana, or WellChild, to support families with seriously ill children. , and African Parks, a conservation charity.

Prince Harry is still 6th in the throne list and his son is 7th.

The future of the Duke and Duchess of Sussex is still unclear with unanimous details.

The SussexRoyal brand that they use in their social media activities is copyrighted but it is not known if the couple will be able to act as an inactive royal member.

Experts point out that the brand can help them earn millions of dollars. But besides, under the agreement, Buckingham Palace will not monitor or interfere with the work of Harry and Meghan, so it is unclear whether they can continue to operate as "SussexRoyal" (Royal Sussex).

Although no longer automatically part of royal events, Harry and Meghan still appear to be at family gatherings at the invitation of the Queen.

It is unclear if they will appear on the balcony of the Royal Palace during memorial events.

Sussexroyal.com, the couple's website, recently posted a promise to update "information about the role and work of the Duke and Duchess of Sussex ... in the correct order at certain times".