New generation rifle model of the US Army

The three arms groups showcased the latest models of the US Army's rifles and machine gun project.

The three leading US arms companies have displayed their rifle and light machine gun (AR) prototypes using their 6.8 mm bullets at the US Army Association's annual military exhibition ( AUSA) 2019 takes place October 13-16. One of these three guns is likely to be selected as the New Generation Division Weapon (NGSW) of the US Army. 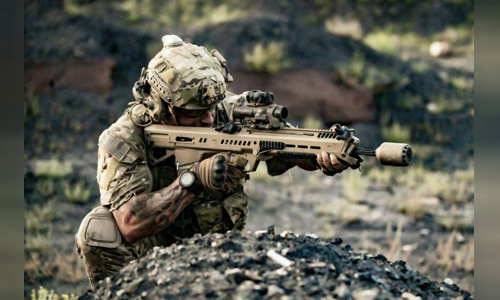 The three companies, General Dynamics, Textron and Sig Sauer, were selected by the US Army in August to participate in the final phase of the NGSW rifle production project - one of its priority for modernization to replace the model. M4A1 carbine rifles and M249-class light machine guns use 5.56 mm bullets in other infantry and melee units.

The ultimate goal of the project is to equip the combat units with 6.8 mm bullets, capable of penetrating bulletproof armor at distances farther than 5.56 mm M855A1 bullets being used.

At AUSA 2019, General Dynamics introduced a bullpup model, designed to bring the entire barrel and lock box assembly behind the handle and trigger.

This design is quite popular in many parts of the world, but not really noticeable in the US. The US military as well as civilian users often prefer traditional designs with a magazine and breeches in the front of the handle.

"To speed up the barrel of a bullet, we need a longer barrel," Kevin Sims, general manager of business development at General Dynamics, explained the reason for choosing the bullpup design. 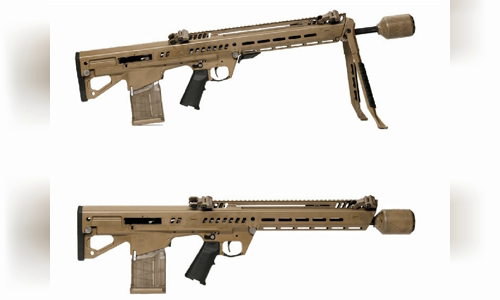 "I was also concerned about the acceptability of bullpup design, but I think those concerns have been removed by positive feedback from users," Sims said. "People don't worry about it. This is a very balanced rifle, the front part is not too heavy."

General Dynamics did not disclose details such as the weight of the new gun model, but confirmed that it weighed less than 4.5 kg and the machine gun version was less than 5 kg, meeting the NGSW standard.

General Dynamics cooperates with True Velocity to produce 6.8 mm bullets with a synthetic plastic casing. Their gun model has a rate of fire of 500 - 750 rounds / minute. 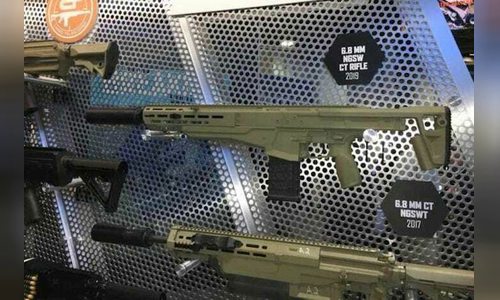 Textron Systems, meanwhile, introduced the NGSW machine-gun model fitted with a wire magazine and rifle variant using the magazine, all based on the compact box design of the Army's Small and Light Weapon Technology program. America.

Textron's gun model is equipped with smart rails that can support the New Generation Fire Control system being developed by the US Army. For this purpose, Textron's rifle prototype was fitted with a small battery in the retractable grip.

Sig Sauer Group is loyal to the classic M4 design for both its new generation army weapons. "This is what the soldiers are familiar with, the innovation may be on the inside, but the soldiers are accustomed to training with M4-type weapons," said Paul Snyder, director of ammunition production systems at Sig Sauer. , said. 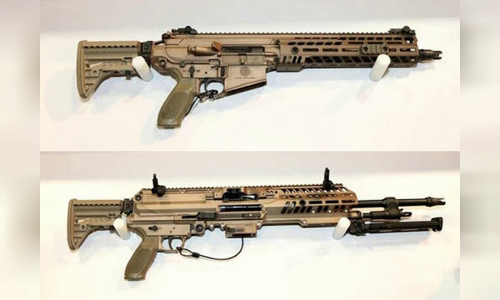 The prototype of the rifle (upper) and the machine gun (lower) used the 6.8 mm ammunition of Sig Sauer Photo: Military.com

Sig Sauer's rifle model has a unique feature: the hand that pulls the barrel of the barrel is located on the opposite side of the bullet hole, so soldiers do not need to take their hands off the trigger to load the ammunition. However, Sig Sauer also kept the traditional M4-style breeching arm closed, leaving soldiers with more options, Snyder said.

This model weighs less than 4.5 kg and the gun barrel 33 cm long, helping the warhead reach the required speed. The gun has two firing modes: oppressive and unpressurized.

MG 6.8 mm uses wire magazine and can be fitted with a magazine that can accommodate wire magazines with 50-100 rounds. This machine gun has the ability to change the barrel quickly to avoid overheating.