Pizza for disabled people in the 'virtual life' fever

USATiffany Fixter, 35, is the owner of Pizzability, a restaurant in Denver, Colorado with employees mostly disabled.

The bakery opened in Cherry Creek district last December, but only became popular on social media since July after Fixter revealed to the press that the store's disabled employees were often discriminated against. 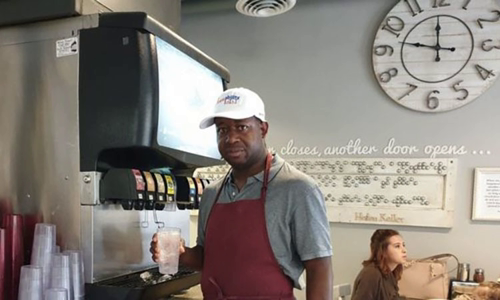 "From the day we opened the door, there were people who stopped and stared at us, we heard them say terrible things like this is where the handicapped work," Fixter said. When a local journalist shared this story of Fixter, everything changed.

From being sporadic to customers every day, lines of people waiting in line at the store started to appear. People come from all over the United States and are willing to wait up to 4 hours to try a piece of pizza.

"The popularity of the store helped us to increase our income from US $ 50 / day to US $ 4,000 / day. It was really a shock and I had to get more staff, get more materials and enhance everything. ", Fixter said.

She added that when she asked guests why they came here, they said they saw information about the disabled's shop on the Internet and they wanted to help, but were disappointed because they had to queue in line.

That "virtual fever" of pizza parlors lasted only two weeks. Within two weeks of the famous social networking Pizzability, there were people who went to the store just to take photos for posting on social networks, or simply to "show off" that they had come here, but did not buy anything, according to Fixter.

"People come here just because they want to take a 'selfie' picture, they take photos of the food and the place, not come to have a full experience. They also don't communicate with employees."

Fixter expressed that "it was great to get social media attention, but we were just 'hot' in those weeks. After the peak, we went back to the present and right now, their sales I hardly pay for rent. "

Pizza owner once told a young man came and ordered a pizza, but after taking a selfie, he canceled the order and left. "Is it really hard to order a $ 2 pizza?", Fixter said.

Fixter used to be a special education teacher. She said recruiting workers with disabilities to create a more comprehensive society, but it was also a big challenge, because some people required her to supervise in specific actions, such as hashing. small food, and ordinary people will have to support them in this.

"Most of our employees are disabled and it is difficult to find work elsewhere," Fixter said, but she has found ways to work for people who are blind, deaf, cerebral palsy or autistic. .

Everything in Fixter's Pizzability restaurant is designed so that people with disabilities can use it, such as embossed labels on carbonated drinks or space for wheelchairs. In 2016, Fixter was successful with the founding of Brewability, the first brewery in the US that primarily employed employees with disabilities.

But she emphasized that business is not a "customer story". "We don't want people to come here out of pity. We want people to come for good food and drinks, because a pizza shop and a brewery are needed, which give people job opportunities." , Fixter said.

"I have never been here before. I thought it was a good idea and I saw information about it being shared on Facebook. I think it's great that they give people with disabilities the opportunity to feel it," Brittany Freyta customers share when they come to the bakery with her husband and daughter. After eating pizza, Freyta said she would definitely come back because she was really pleased.

Aaron Harris, an autistic person, has been working at Pizzability since the bakery opened. "I like to make pizza and want a stable job. But if there are no customers, I'm worried about what we will do next," Harris said.

But Fixter said she would not give up. "It was a difficult year. I sold my house in Kansas to achieve this dream. It is important that I continue and try, as much as possible," Fixter said.