The US Navy dismissed the aircraft carrier captain

The US Navy took command of USS Theodore Roosevelt of Colonel Brett Crozier, who wrote a letter calling for the evacuation of the crew to stop Covid-19.

"Colonel Crozier did what he thought was the best to protect the crew. Unfortunately, this action was counterproductive, causing the family of sailors to worry unnecessarily without planning. "The US Navy Secretary of State Thomas Modly said today after announcing the dismissal of Colonel Brett Crozier, the captain of the aircraft carrier USS Theodore Roosevelt. 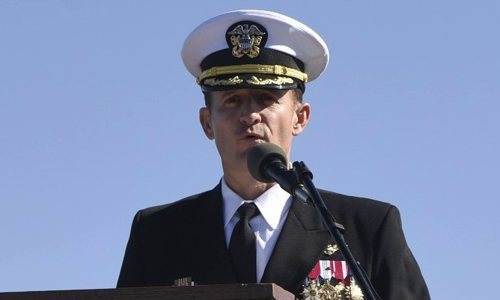 Colonel Crozier during the inauguration of USS Theodore Roosevelt commander in late 2019 Photo: US Navy

Acting Minister Modly affirmed that this was a decision to show confidence in Colonel Crozier's commanding ability in the anti-Covid-19 effort and ensuring the USS Theodore Roosevelt's national security requirements. Colonel Crozier retains his rank and will be transferred to another mission.

"The responsibility for making decisions is entirely mine. I don't expect to be praised for that. Colonel Crozier is a great man, but the complex challenge posed by Covid-19 has exceeded the professional capacity of the he, "Modly added.

A letter of appeal calling for the evacuation of 4,000 USS aircraft carrier Theodore Roosevelt was sent to his superior in accordance with the procedure, but Colonel Crozier seemed to be disciplined for letting its contents leak out.

"I have no information nor do I imply that Colonel Crozier intentionally slipped the content of the message into the media. However, he sent it publicly and did not guarantee its confidentiality, which is Crozier's responsibility. ", Acting Minister Modly added.

This is an example of the Covid-19 challenge to all classes and industries in the US, even for forces accustomed to complex and dangerous missions such as the military.

The demotion can also prevent officers from referring to the risk posed by nCoV, in the context of the Pentagon seeking to limit the disclosure of Covid-19 infection in the armed forces because Concerned about revealing weaknesses to competitors.

Many lawmakers have criticized Crozier's dismissal, saying that the US Navy needs people willing to stand up to protect the interests of sailors. "It was a patriot who was trying to do the best for his crew. I don't know why they disciplined him for that, especially when the lives of many soldiers were at stake." Democratic senator Mark Warner said.

The first three cases of nCoV infection on USS Theodore Roosevelt were recorded on March 24. This is the first time the US Navy has detected cases of people with Covid-19 on a battleship deployed.

The outbreak of Covid-19 forced the US warship to suspend its mission and dock at Guam on March 26 to test the crew of more than 5,000 people. During this time, the crew was not allowed to leave the dock, the forces at Guam base were also denied access to the ship.

Nearly 100 USS crew members Theodore Roosevelt were tested positive for nCoV. About 1,000 soldiers have left the ship, the number will increase to 2,700 in the next few days.