The boy lost 80 kg to be a police officer

United States Rarar Lyle of Virginia has fulfilled his dream of becoming a police officer after dropping from 180 kg to 100 kg.

The Richmond City Police Department, Virginia, last week shared a photo of new policeman Romar Lyle and praised the change in his appearance. The picture shows that from an obese young man in late 2105, Lyle has now become a healthy, neat body policeman. 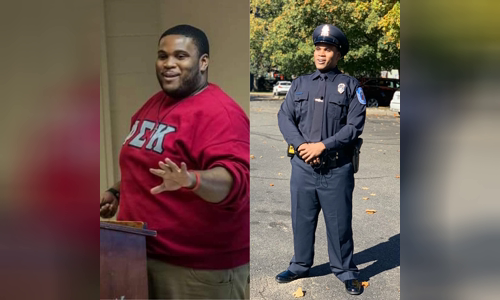 The change in appearance of Romar Lyle after 4 years Photo: Richmond Police Department

Lyle said he always wanted to be a police officer but that would not be possible if he did not change his weight. At its peak, Lyle once weighed more than 180 kg.

"If I want to work in this industry, I have to constantly exercise and fitness," Lyle said.

Lyle was then introduced to the CrossFit weight loss program, exercise and healthy diet. By the second year, he lost 60 kg, then did not stop training and lost more than 15 kg.

"One of the happiest feelings is going into a store, buying items hanging on a shelf and knowing they will fit you, or going to an amusement park without having to worry about the maximum weight regulation or don't fit in a chair ".

Earlier this month, Lyle was one of 19 students graduating class 120 of the Richmond Police Academy.

"On graduation day, a rookie came to me and told me that I was his inspiration and the motivation to help him pass the academy. Those words encouraged my spirit very much. I know myself. have to accomplish the goal, not only for myself but also for the people who trusted me, "he said.

So far Lyle has lost a total of 80 kg and is looking to lose another 11 kg.

"It was one of the biggest challenges I've ever done, but it taught me a lot of life skills and meaningful lessons that I'll take with me for the rest of my life," Lyle said. .