The campaign turned Napoleon into a military legend

The outstanding ability of the army to help Napoleon led the weak army defeated the overwhelmingly large rival on the Italian battlefield in 1796.

In 1792, the First Alliance War broke out when several European powers joined forces against the French Republic after the revolution broke out in this country. The attack on Italy in 1796 was part of the war, and one of Napoleon Bonaparte's most important military campaigns, leading him to the ranks of eminent commanders and paving the way for a series of French victories. when Napoleon was crowned emperor. 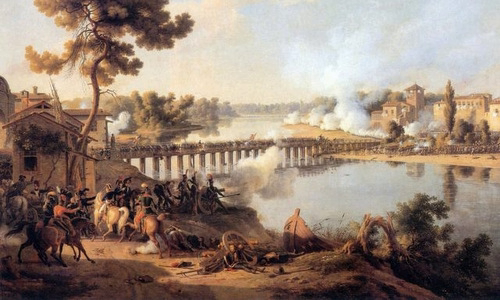 The battle at the Lodi Bridge in 1796 Photo: War History

In this campaign, the force relationship between France and the Austrian opponent did not change compared to the fights before the time of the French Revolution. The only difference is Napoleon's use of troops. He sent the army marching to Italy, causing the enemy to not return quickly with agility, assertiveness and flexibility on the battlefield.

Italy at that time was not a united nation, but rather a collection of different states. The Austrian Army enforced direct rule or governed state governments through political influence.

Upon arriving in northern Italy in March 1796, Napoleon held 60 artillery guns and 37,000 soldiers, most of whom were ill, undisciplined, and had no reinforcements because France was focusing on Large-scale attack on the Rhine.

On the other side of the line, Austria and its allies overwhelmed the army with more than 50,000 people. However, Napoleon's talent turned the retreating French army into a force of pride.

The first major battle in the Italian campaign took place in Montenotte on April 12. Napoleon set up troops on a mountain pass and enticed a portion of Austrian forces to enter. Afterwards, France attacked with overwhelming troops, separating the Austrian army from its allies in Piedmont, northwestern Italy.

Using the "speed of victory" strategy, Napoleon's army defeated the Piedmont troops in Millesumo and Vico, the Austrian army in Dego and Ceva, forcing the opponent to defend. After these battles, Napoleon continued to launch a full-scale war against the Piedmont forces and won at Mondovi. 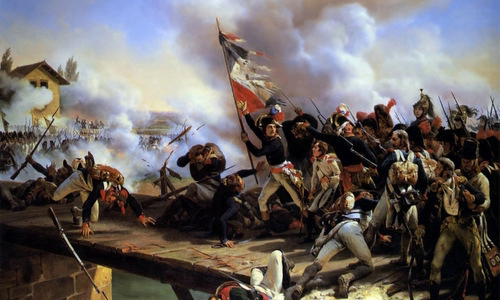 The Piedmont forces surrendered and accepted the Cherasco armistice on April 28. It took Napoleon only one month to defeat the Piedmont, which had been fighting the French for more than three years earlier. The French lost 6,000 soldiers, while the losses of the Austrian and its allies were over 25,000.

After this victory, Napoleon forces continued toward Milan, where they confronted the Austrian forces at the Lodi Bridge. The bridge is nearly 4 meters wide, 61 meters long and is always guarded by an Austrian battery of artillery.

Napoleon sent his cavalry around the flank to find a way to cross the river, and ordered the infantry to cross the bridge to attack to stop the enemy. This tactic caused the French infantry to suffer heavy damage from Austrian artillery shells. Some soldiers jumped into the river to avoid bullets and survived, but were attacked by enemy cavalry when swimming to the other side.

However, at this time, the French cavalry had managed to cross the river and suddenly attacked the flank so that the Austrian troops could not back up. The defeat of the Austrians at the Lodi Bridge helped Napoleon capture Milan.

Taking orders from the French government, Napoleon continued to march to central Italy, where he was presented with many masterpieces of art to not attack the papal territories. An Austrian army was sent here but was defeated by the French army in Lonato.

After defeating the French in the Rhine region, Austria sent more troops to Italy to deal with the Napoleon army. On October 12, Napoleon suffered his first defeat on the outskirts of Verona. 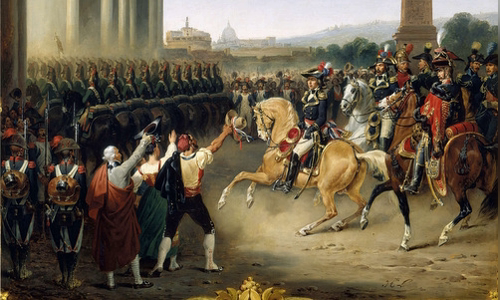 A few days later, he regained his joy of winning the battle at Arcole. Initially, he commanded the ice army with the hope of winning like in Lodi. When the plan failed, Napoleon moved his troops to the south, built a floating bridge on the swamp, and hit the Austrian flank. Although both sides suffered great casualties, the French army was the victors in Arcole.

The war lasted throughout the winter with many small skirmishes. Both sides suffered casualties but Austria could not recapture the lost territories. In January 1997, Napoleon defeated the enemy in Mantua, forcing 30,000 Austrian troops to surrender.

Despite its failure, Austria refused to negotiate peace until April 1797. Napoleon himself negotiated, instead of leaving the job to diplomats and politicians.

Austria made significant concessions in Italy and their colony in Northern Europe. Belgium, the Netherlands and the west bank of the Rhine became French territory, the Napoleon regions occupied in northern Italy also gained independence and became the Republic of Cisalpine.

Napoleon then sought to spread the news of his greatness. He asked the two newspapers to successfully acclaim both in the military and in his home country to increase his reputation, paving the way for the latter to become emperor.