The former US ambassador revealed Trump's 'plot to overthrow'

Former US ambassador to the United Nations, Nikki Haley, said Trump's top aides tried to recruit her to weaken the President.

Haley revealed in her upcoming memoir that former US Secretary of State Rex Tillerson and former White House chief of staff John Kelly had wanted to use her to serve the conspiracy to oust President Trump, which they called in an attempt to "save the country", she rejected the offer. 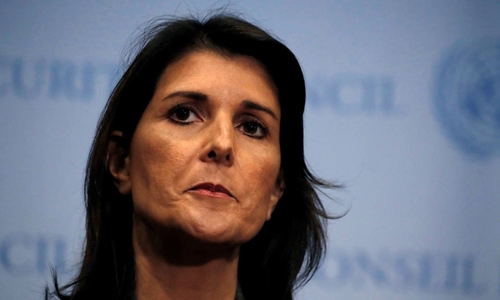 Former US ambassador to the United Nations Nikki Haley in New York on September 10 Photo: Reuters.

"Kelly and Tillerson confided to me that when they were against the President, they were not disobedient, they were just trying to save the country," the former US ambassador to the United Nations wrote in a book entitled. "With all respect".

Haley wrote that former Secretary of State Tillerson had told her people would die if Trump was not controlled. However, the former US ambassador said she supported most of Trump's foreign policy decisions, despite other White House members who tried to stop or delay them.

In an interview aired on November 10 on CBS, Haley called the plot to overthrow the President of Tillerson and Kelly an "attack".

"They should have told the President about their differences and left if they didn't like what he was doing. The plot to overthrow the President is really a very dangerous thing. It goes against the constitution." France and go against what Americans want, "Haley said.

Former US Secretary of State Rex Tillerson and former White House chief of staff John Kelly and the White House have not yet commented on the information.

US President Donald Trump posted on Twitter on November 10 endorsing the contents of Haley's book and wishing her good luck. The White House owner also urged everyone to order the book and attend her book tour.

The former US ambassador to the United Nations is one of the former officials praised by Trump for having a "great career" when he has taken a tough stance on Iran and justified the US cutting foreign aid. .

Haley's departure is seen as a great loss for officials in the Trump administration. The 46-year-old former ambassador has repeatedly said he will remain loyal to Trump and help improve US influence on the international arena.