Sujith Wilson fell into an abandoned bore well 180 meters deep while playing with a friend on October 25. Watching his son fall into the well, the mother shouted and encouraged her son not to cry. 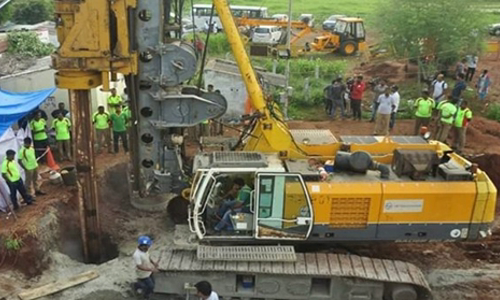 The big drill was used by rescue forces to drill a parallel pit to rescue Wilson in Tamil Nadu Photo: ANI

Initially, Wilson stuck at a depth of about 10 meters, but then fell deeper. Rescuers pumped oxygen to the boy to breathe but the mud made it impossible to assess the victim's condition.

After a failed attempt to save Wilson with a rope, they were using heavy machinery to dig a hole parallel to the well. On October 27, the second drill was delivered after the first failed to dig the hole because the ground was too hard. However, local reporters said the situation has not improved much.

According to authorities, through a camera lowered down the well, they heard the boy still breathing.

Wilson's story is being shared across Indian social networks. Prayers were held at temples, churches and cathedrals throughout the state of Tamil Nadu for the boy's safe return.

In June, a child died in a similar pit in Punjab state after a two-day rescue operation failed. People are asking the government to punish those who leave these dangerous open holes.

Sujith Wilson, an Indian boy, falls into a well, rescuing an Indian boy trapped in a well,
Facebook
Twitter
Tumblr
E-Mail
Pinterest
previous post The journey to spread violence by the IS supreme leader IS next post Found wreck intact from the 18th century