Iraq: The US embassy in Baghdad on January 26 was hit by three rockets that injured at least one.

One rocket hit the diner inside the embassy, and the other two fell nearby. At least one person was injured but it is unclear how serious the injury was and the person was an American citizen or Iraqi employee working there. The embassy has yet to comment and it is unclear which side is behind the attack. 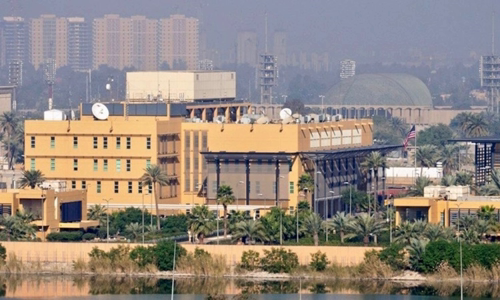 US Embassy on the banks of the Tigris River in Baghdad, Iraq Photo: Reuters

Iraqi Prime Minister Adel Abdel Mahdi and National Assembly Chairman Mohammed Halbusi both condemned the incident, saying it could send the country into war. Iraq has been dragged into a tit-for-tat confrontation between the US and Iran for a month.

Late in December last year, a similar attack on a military base in northern Iraq killed a US contractor. Washington responded with an air strike against Iran-backed Kataeb Hezbollah.

Less than a week later, the US airstrike with unmanned aircraft killed Iranian generals Qassem Soleimani and Abu Mahdi al-Muhandis, commander of the Kataeb Hezbollah group, outside Baghdad airport. Iran retaliated with a ballistic missile strike on two military bases with US troops stationed in Iraq.

About 5,200 US troops are present in Iraq to lead a global coalition against the self-proclaimed Islamic State (IS) organization. However, the US offensive in Baghdad has sparked criticism, demanding Washington's withdrawal.