Trudeau said he had no symptoms of nCoV infection even though his wife was positive, adding that her condition was mild.

"I want to make it clear that I have no symptoms and feel healthy. The technology helps me work remotely," Canadian Prime Minister Justin Trudeau told a press conference on March 13 outside his home in Ottawa, when reporters stood a few meters away. 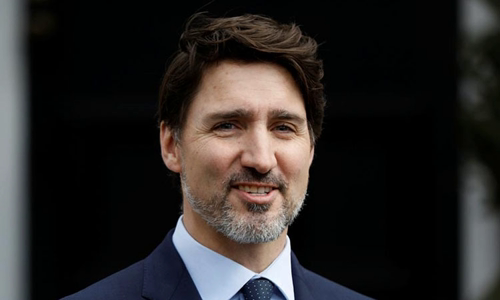 Canadian Prime Minister Justin Trudeau at a press conference outside his home in Ottawa on March 13 Photo: Reuters

This was the first time Trudeau publicly spoke after Sophie Gregoire Trudeau, his wife, was positive for nCoV. She had symptoms since returning to Canada after a business trip in London, England. The Trudeau couple are quarantined, while the Prime Minister's office said on March 12 that he had not been tested because he had no symptoms.

"Sophie's symptoms are still mild. We are receiving good care and following the same medical recommendations as all Canadians," Trudeau said. Health officials in Canada require all citizens to quarantine themselves if they develop flu-like symptoms and get tested, especially those who have recently traveled abroad.

The Canadian Prime Minister also expressed the feeling of "inconvenience and a little frustrating" when working from afar. "We all need to interact with society, but ultimately we still have to do this," he said.

Despite working from home, Trudeau maintains a busy schedule, such as a phone call with French President Emmanuel Macron, US President Donald Trump, Italian Prime Minister Giuseppe Conte, as well as local officials in Canada and the cabinet.

Canada currently records about 200 cases of nCoV and one death. The country is among 145 countries and territories where Covid-19 appears. The number of nCoV infections globally has exceeded 145,000, with more than 5,400 deaths and more than 72,500 recovery cases.