Global nCoV infections are nearly 92 million, with more than 3,000 deaths every day in the US

The world records nearly 92 million CoV cases, nearly 2 million deaths, while the average number of deaths per day from Covid-19 in the US exceeds 3,000. 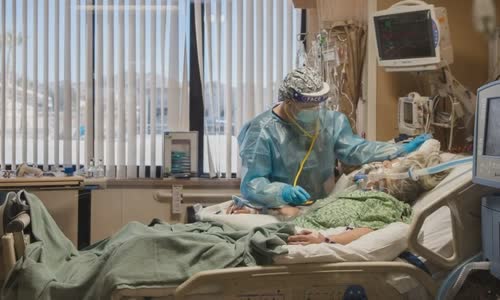 The nurse taking care of the Covid-19 patient in the active treatment room at the St Preventive Medicine Center Photo: AFP

After the Capitol Hill riot caused by the crowd supporting President Donald Trump on January 6, many MPs were infected with nCoV, a scenario that experts have warned.

Biden has repeatedly declared that the top priority after taking office is to tackle the pandemic.

Officials expect about 300 million people at high risk to be vaccinated against Covid-19 in the next 6-8 months.

Brazil, the world's third largest epidemic region, recorded an additional 1,073 deaths from Covid-19, bringing the total number of deaths to 204,690.

The Brazilian government has said it will launch the Covid-19 vaccination campaign in at least three weeks, after receiving criticism for its slow action, with a second wave of infections appearing from November 2020.

The Butantan Institute, a prominent Brazilian pharmaceutical maker that is working with Chinese biotechnology company Sinovac, said its Coronavac vaccine has achieved 50 percent efficacy in trials in Brazil.

Russia, the fourth largest epidemic region in the world, recorded an additional 22,934 nCoV infections and 531 deaths, bringing the total number of infections and deaths to 3,448,203 and 62,804 respectively.

Russian media reported yesterday that the US pharmaceutical company Pfizer said it was considering the possibility of applying for a Covid-19 vaccine license in the country.

More than 1.5 million people in the UK have been vaccinated with Covid-19 in the country's largest immunization program in history, with priority given to the elderly, their caregivers and health care workers.

The French government is considering the possibility of imposing a third national blockade, or extending the curfew being applied in some regions to a national scale.

Chancellor Angela Merkel yesterday warned Germany there is a need to extend the blockade until early April. "If we do not stop the new strain of the virus in the UK, we will see a 10-fold increase in the number of nCoV infections until now.

Germany last week stepped up a nationwide blockade and renewed it until the end of January, on fears that a variant of the nCoV strain discovered in the UK could spread heavily and overload hospitals in the country.

The country today began its campaign to vaccinate Covid-19.

CoronaVac, the Covid-19 vaccine developed by Chinese biotechnology firm Sinovac, was approved for emergency use by Indonesia on January 11, with an efficiency level of 65.3 percent.

Filipino officials said on January 10 that the country had secured 30 million doses of Covid-19 vaccine developed by US pharmaceutical company Novavax, and hoped to concentrate 148 million doses of vaccine from 7 companies this year,

Malaysia, another complex developing epidemic in Southeast Asia, recorded an additional 3,309 cases and 4 deaths, bringing the total number of infections and deaths to 141,533 and 559, respectively.

According to a statement from the royal palace of Malaysia yesterday, King Abdullah Sultan Ahmad Shah "assessed that the Covid-19 outbreak is at a very serious stage and needs to declare a state of emergency".

Malaysian Prime Minister Muhyiddin Yassin earlier announced strict new regulations in more than half of the country, including ordering people to stay at home and shutting down most businesses.