The day before the Capitol Hill riots, the FBI warned of a violent "war" in its internal reporting.

The Washington Post reported that on January 5, the FBI office in Norfolk, Virginia, "issued an internal warning about extremists moving to Washington to take action. 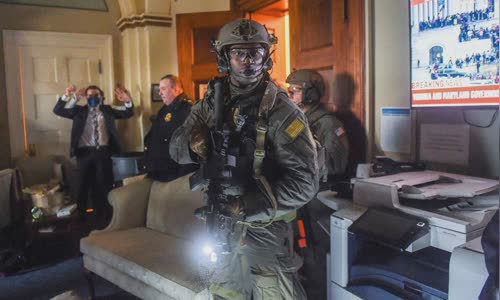 The report "paints a dire picture of dangerous plans, including individuals sharing a map of tunnels in the complex and meeting points that could be where plotters meet in several states."

Security threats and violence have sparked a warning to law enforcement, but have not led to any further security enhancement.

The Washington Post article also questioned why authorities were not prepared to respond to riot and future threats at a time when the FBI warned of armed protests ahead of its inauguration.

The article covered an online topic in which the masterminds discussed their plans, quoting an individual: "Get ready to fight. Congress needs to hear the sound of broken glass, the sound of the door being kicked out.

This information was "briefly briefed to FBI officials at their Washington office prior to the attack," according to the Washington Post.

The Washington Post also reported that the FBI was very careful with the words describing the individuals and organizations listed in the report.

But the report also warns that "based on known intelligence or observing historical events, it is possible that these legally protected activities could result in violence against an individual or persons.

Officials said last week they had received no intelligence indicating a threat against Capitol Hill before the riot broke out.

The Washington Post article prompted Rep. Ted Lieu, California Democrat, a member of the House Judiciary Committee, to call for an investigation.

"The communication and the command chain are clearly broken. It will be interesting to see the internal intelligence memo for the parliamentary police and the support forces. I guess the love report.