Quarantine hotels in South Korea monitor the hallway via camera to make sure the quarantine does not go outside and that each room contains only one guest.

China has been able to contain Covid-19 over the past few months.

Passengers at the international airport in Shanghai on November 27 Photo: AFP

After arriving, they continued to test and the nCoV-positive person was taken to a medical facility.

At a hotel in Shanghai in April, doctors, nurses, psychologists and policemen were on duty on the first floor as they looked after the isolated guests.

They avoid direct contact with guests so all communication is done by the hotel's internal telephone system.

At a hotel in Beijing in March, Ma Mouyang, an international student returning from Scotland, said daily health workers dressed in protective gear came to his room to take his temperature.

A room can only accommodate one person, with some exceptions allowed such as a caregiver or children.

In Korea, all people coming from abroad, including Korean citizens who return home, must be on quarantine for 14 days.

The bracelet signals the authorities when the wearer leaves the home or attempts to demolish it.

Foreigners arriving in Korea for a short period of time, a Korean citizen or a foreign national whose residence is not suitable for isolation are subject to concentrated isolation at a designated government facility at a cost of approximately US $ 2,000 per person. 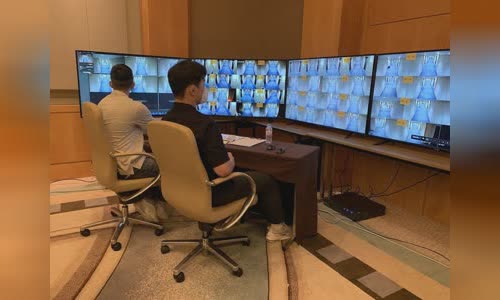 The staff monitors the security cameras to ensure guests do not violate the quarantine regulations at their hotels in Incheon in August Photo: Korea Herald

The spouse or descendant of a Korean citizen or permanent resident of Korea can isolate themselves at the residence of a relative instead of concentrated isolation by presenting documents proving the family relationship.

Diplomatic and official visa holders who test negative for nCoV are exempt from quarantine but must report their health daily through the "Self-Diagnosis" application and by phone to health officials.

At a quarantined hotel in Incheon, the check-in process is 4 steps.

Bae Su-mi, who runs a quarantine hotel in Incheon, in August said the facility only checks in for up to 20 people at a time to ensure social distance.

During the two-week isolation period, guests must stay completely in the room.

"Since some people test positive after they get negative in the initial tests, we will test everyone again before they leave," said Kim Sang-gi, employee.

The Incheon location has 41 staff members from the Ministry of Health, Home Affairs, Environment, Justice and Defense, 13 from the police force and one from the fire department, not to mention hotel staff.

"We are committed to keeping our visitors, staff, and residents safe," said Ko Deuk-yung, an official at the South Korean Ministry of Health.

Covid-19, Covid, how countries are isolated from Covid, experiences against Covid, World social politics, Documentation,
Facebook
Twitter
Tumblr
E-Mail
Pinterest
previous post Joshua Wong was sentenced to prison for more than a year next post Russia received a large-scale vaccination of Covid-19 from the following week