Lost by the parties in Syria after the Russia - Turkey agreement

Russia, Turkey and Syria all seem to achieve political goals, while the United States has lost its build position over the years.

Russian President Vladimir Putin and his Turkish counterpart Recep Tayyip Erdogan agreed on October 22 to allow the Russian military police and Syrian border forces to replace the Kurdish militia in a 30-km buffer zone along the Syrian-Turkish border. Russian and Turkish forces will then patrol the 10-km-wide area in the safety buffer zone Ankara wants to establish in northeastern Syria. 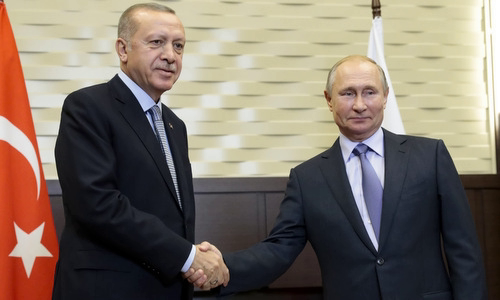 This is the result of a series of events in northern Syria, originating from the time Turkey announced the opening of the "Spring of Peace" military campaign, leading to major changes in the balance of power and interests. geopolitics of countries in this region, according to experts.

Although Turkey has previously mustered troops near the Syrian border and has made many threatening moves, the Syrian Democratic Forces (SDF), with the core of the Kurdish militia, believe that Ankara will not use force. , because they are side by side with many American advisors, special forces, who are considered allies in the fight against the self-proclaimed Islamic State (IS) militants.

However, the Kurds were "unable to back up" when US President Donald Trump decided to withdraw all troops stationed in northeastern Syria, shortly before Turkey's military campaign began on 9 / ten. Faced with the powerful Turkish regular forces, SDF repeatedly lost many important areas.

"They are busy fighting ISIS and did not expect that the US would allow the Turkish army to cross the border. The Kurdish militia are tired of constant fighting, they are absolutely not an opponent of the Turkish army. Turkey and the proxy, "commented Mehmet Ozalp, director of the Center for Islamic Studies at Charles Sturt University in Australia.

In the face of criticism of abandoning allies, Trump on October 14 issued sanctions against Turkey and launched a "campaign suspension" agreement three days later. However, this belated US move did not change the situation, as Turkey warned that it would accelerate the attack if the Kurds did not completely withdraw from the buffer zone established by Ankara at the border.

The deal actually came only on October 22 after a 6-hour talks between President Putin and his counterpart Erdogan in the city of Sochi. Accordingly, the Kurdish militia area has to withdraw three times the area specified in the US-Turkey agreement reached on October 17, covering most of the territory that Ankara wants to create a buffer zone.

"Turkey's plan to create a buffer zone of 32 km wide and 444 km long is almost complete. However, this is only the beginning of three key goals of President Erdogan," Ozalp said.

Those goals include resettling millions of Arab refugees in northeastern Syria, blocking Kurdish efforts to establish autonomous territories and securing political power by maintaining an alliance with the party. Turkey National Action (MHP). 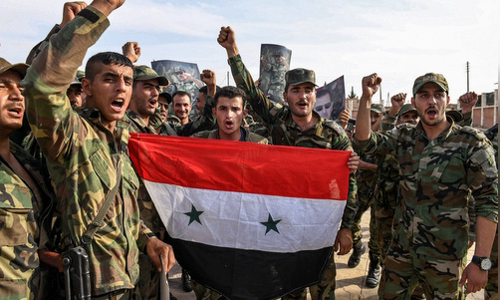 The failure of the Justice and Development Party (AKP) to power the opposition in the election in the city of Istanbul in June 2019 seems to be closely related to the Syrian migrant crisis, boosting the General Erdogan acted aggressively with the Kurds in Syria to regain the trust of the people.

"Any withdrawal could be considered a failure by the Turkish public. Erdogan certainly wants to start the 2023 election race with a winning position in Syria. That requires Ankara." maintain its presence in Syria for a long time to come, "said Ozalp.

Meanwhile, the decision to withdraw almost all of its forces from Syria makes it difficult for the United States to influence the developments in this Middle Eastern country, leaving only the governments of Syria and Russia enough to influence Turkey's goals. States.

"Before the Spring of Peace campaign, the Kurdish militia and the Syrian government army often avoided conflict. The Kurds hoped to have autonomous regions and an important role in post-civilian negotiations, in when President Bashar al-Assad can maintain power, "Ozalp said.

However, Ankara's military action offers a new opportunity for Damascus, as the Syrian government quickly reached an alliance agreement with the Kurdish People's Protection Units (YPG), the SDF's core force. The Syrian army has taken over many YPG-controlled areas they've never been to since 2012, including the strategic towns of Kobani or Manbij near the Turkish border.

Turkey's relocation of millions of Arabs in northern Syria also prevented the Kurds from establishing an autonomous region, consistent with Assad's goal of unifying the entire Syrian territory after years of civil war.

Another close benefit to the Syrian President is the strategic city of Idlib in the northwest, the last stronghold of rebels against the government. Many armed groups gathered here after being defeated by the Syrian army, a series of negotiations that took place over the years to avoid an offensive campaign against the area.

Assad will most likely ask Turkey to stop supporting rebel groups in Idlib, in return for Ankara to maintain a temporary presence in northern Syria. 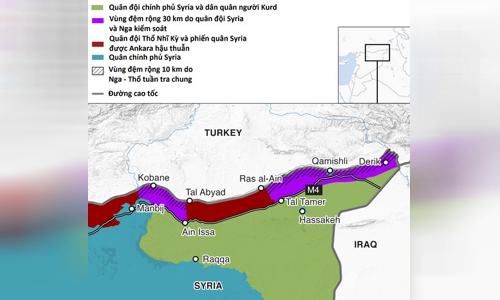 Forces in northern Syria as of October 23 Photo: BBC

"Although the Kurdish forces have reached an agreement with the Assad regime, it is difficult to start a military conflict between Turkey and Syria. Damascus will control strategic locations such as Kobani and Manbij, while Ankara maintains a buffer zone." to push the Kurds away from the border, "Ozalp said.

This will be a time for Russia to demonstrate its role as an intermediary in Syria and significantly increase its influence in the country. After the US withdrawal, Russia seemed to be the only party that could negotiate with all parties involved in Syria.

Moscow is Damascus's largest ally and maintains good relations with Ankara. President Erdogan will certainly not directly sit at the table to talk with Assad, all negotiations will be conducted through President Putin.

Forces in northern Syria as of October 23. Graphics: BBC.

"The deal with Erdogan serves many of Russia's key goals, including maintaining power for President Assad to ensure influence in the Middle East and a military presence in the Mediterranean, while undermining NATO. by pulling Turkey away from this organization, "Ozalp said.

If the Kurds realize that the Assad regime does not intend to engage Turkey, they may wage a guerrilla war against Ankara's forces in northern Syria. This will damage the Turkish military, but increasingly support the allegations of "Kurdish militias are terrorists" made by President Erdogan.

"No matter what happens, Turkey will be stationed in northern Syria in the near future. The ultimate winner will likely be the Assad regime once they regain control of the entire country as before." time of the civil war in 2011, "said expert Ozalp.

The future of northern Syria after the Russia-Turkey agreement, northern Syria, the Russia-Turkey agreement, the US withdrawal from Syria, Turkish President Recep Tayyip Erdogan, Russian President Vladimir Putin,
Facebook
Twitter
Tumblr
E-Mail
Pinterest
previous post The pilot was at fault in the Lion Air plane crash next post Arrested two suspects in the case of 39 deaths in containers