Covid-19 has appeared in 179 countries and territories as world leaders disburse nearly one trillion USD to support the global economy. The pandemic of the century seems to be getting out of control. 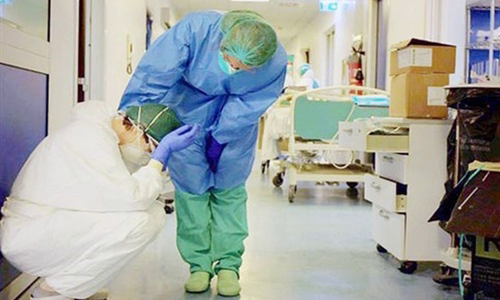 Italy, the largest epidemic region in Europe and the second largest in the world, recorded 5,322 new cases and 427 deaths, bringing the number of cases to 41,035 and the number of deaths to 3,405. The death rate is 8.3%, double the global average of 4.1%, mainly because Italy has Europe's oldest population.

Chinese health experts who came to assist Italy in dealing with the outbreak said that the blockade measure in the Lombardy region, which was hardest hit, was not drastic enough. Public transportation is still active, people travel, have dinner, party in hotels and do not wear masks.

Spain is the second largest epidemic region in Europe with 3,308 new cases, bringing the number of cases to 18,077. The country also recorded 193 more deaths, bringing the death toll to 831. The Spanish government has ordered the closure of all hotels and motels in 7 days to prevent Covid-19 from spreading. Long-term stays may be open.

The Iranian Ministry of Health said yesterday that every 10 minutes an Iranian person died of nCoV and every hour, an additional 50 Iranians became infected. Iranian President Hassan Rouhani ordered the closure of all shopping malls and markets, except for essential facilities such as pharmacies and grocery stores for 15 days, starting March 21.

In the US, an additional 4,412 new cases have been identified, bringing the number of cases across the country to 13,671, of which 191 people have died. US President Donald Trump has decided to cancel the G7 summit at Camp David scheduled to take place in June. Instead, the event will be held by videoconference so that "each country gathers all its resources. deal with Covid-19 ".

South Korea and China have not released new figures. South Korea recorded 152 new infections yesterday, an increase of over 100 after a week of continuous declines, bringing the number of cases in the country to 8,565, while 91 people died, mostly elderly patients with the disease. background. Korean officials are on high alert as more and more outbreaks are being detected.

China did not appear for the first time in a new domestic case since the outbreak in January, but there were 34 "imported" infections. This marks an important milestone in efforts to contain the disease in China.

In Southeast Asia, Malaysia recorded the largest number of cases with 900 cases, of which two died. Indonesia recorded the largest number of deaths with 25 cases, the Philippines ranked second with 17 cases. Singapore, Thailand, Singapore and the Philippines recorded 345, 272 and 217 cases respectively. Laos is the only country in Southeast Asia where no nCoV infection has occurred.

Despite the complicated development of Covid-19, thousands of Muslim pilgrims across Asia still flock to Gowa, South Sulawesi province, Indonesia to attend the event on March 19-22. Earlier, similar events in Malaysia led to more than 500 people infected with nCoV.

The world currently records 244,615 cases, 10,015 deaths and 87,407 people have recovered. The only new countries and territories to report the first cases are Chad, El Salvador, Fiji, Nicaragua, Niger and the Isle of Man.

"If we let the virus spread like wildfire, especially in the most vulnerable areas in the world, it will kill millions of people," UN Secretary General Antonio Guterres warned on Tuesday. 3.

Covid-19 map of the world. Click on image to see details.