China has not recorded more cases of domestic nCoV in the past two days, but that does not mean that Yu Jiahui will return home.

"It doesn't make much sense to fly back now," said Yu, 26, who works for an aerospace company in Germany. "Air tickets are too expensive and the risk of infection during transportation is very high." 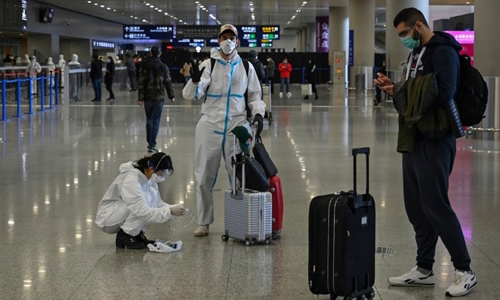 Since Covid-19 started in Wuhan, China in early December 2019, more than 240,000 people have been infected with nCoV and more than 10,000 have died globally. China claims to have contained the epidemic, while WHO has declared Europe a new "global epidemic center".

For the 35 million Chinese people studying or working abroad, the global health crisis has made them hesitant to think about whether to stay or go home.

Germany is the third largest epidemic region in Europe with more than 15,000 cases and more than 40 deaths. But Yu made the decision. "I think not going anywhere is the best solution in the context of an increasingly dangerous epidemic," he said. "My company is about to close down, I have restricted to go out."

Yu was not the only one who chose to stay. Stephen, a 25-year-old graduate student at Cranfield University in the UK, made the same decision.

"Pandemic less affects me than I thought, because my school is located in a rural area with few people," he said. "If flying back to China, the risk is even higher because many people infected with nCoV can find their way back home for treatment."

Dominic Huang, 25, a graduate student in quantum chemistry at Sheffield University in northern England, said he was aware of the dangers of Covid-19, but it had a limited impact on everyday life. . Huang can still study without having to go to the lab.

"My school canceled all normal classes on March 16 and switched to online teaching," he said. "I have no plan to return because I don't want to burden the country anymore."

Huang mentioned the wave of "foreign" infections that China is facing. China has recorded a total of 228 imported cases, many of whom are Chinese nationals returning from abroad.

Jason Ren, a Chinese dentist working in the southeastern United States, said that although there was no plan to return home to avoid the epidemic, he was concerned that if the crisis worsened, the US health system could collapse, leading to to social unrest. The United States recorded more than 14,000 cases with 200 deaths.

Meanwhile, translator Chen rushed back to Beijing after completing his mission in Kiev, Ukraine. Chen said she was scheduled to return to Beijing on March 18, but after Ukraine announced closing the border for at least two weeks from March 16, she changed tickets and took the last flight to leave. out of the country that evening, though she spent several more transit days in Dubai and Singapore.

"Such moves are quite time consuming and risk getting infected along the way," she said. Chen was also worried about what she faced when she returned to Beijing. "I was quite worried when I read the rule a few days ago that all passengers to Beijing had to isolate and pay for themselves."

Beijing requires foreigners from the city to enter a 14-day quarantine at the designated hotel and pay the cost. "I used to live alone in an apartment in Beijing, but if I wasn't able to isolate myself there, I'm not sure if I could afford the isolation costs."

Meanwhile, for Yi Ming, 27, studying at the National University of Arts and Design in Ireland, deciding to return home was an easy one.

"The school has started teaching online and we can send all homework online, so I decided to return to China even though the ticket price is many times higher than normal," he said.

Yi will wear protective clothing during the journey. He decorated it with pictures of Chinese flags, Irish flags, anti-epidemic doctors and some of his favorite foods. Yi hoped it would keep him safe.