Trump and Xi praised each other at the start of the year for a trade deal, and the two countries are now seeking to blame each other on Covid-19.

Trump opened the press conference on March 18 by describing nCoV as a "Chinese virus", like the statement of Secretary of State Mike Pompeo and other top cabinet officials. Covid-19 is thought to have originated from a food market in Wuhan, China, and the country has recorded nearly 81,000 cases, more than 3,200 deaths. 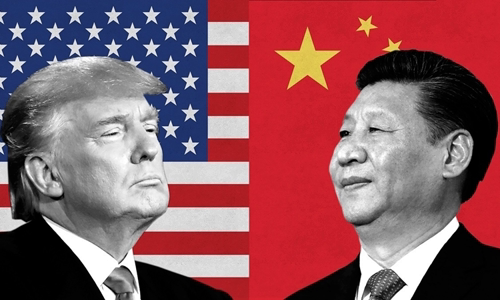 WHO has warned against naming diseases, opposing names that cause discrimination or discrimination against certain ethnic groups. But Trump defended his position, explaining he said so in part because Chinese officials propagandized that the US might have brought the epidemic to their country.

On March 12, Chinese Foreign Ministry spokesman Zhao Lian-Kien wrote on Twitter that "it is possible that the US military brought nCoV to Wuhan", although there was no evidence.

Trump's latest comments are likely to escalate the tension. "It will definitely provoke the Chinese government at a time when they are making non-stop propaganda efforts." Mira Rapp-Hooper, from the Council on Foreign Relations in the US said. "China can continue to blame America."

The US-China strategy of "poking the nose" into each other takes place when both countries face criticism about how they deal with the epidemic. "This is a 'diversionary' war - inciting international tensions to distract the public's attention, making them less aware of domestic issues," said Susan Shirk, president of the China Center. 21st century at the University of California San Diego, said.

China suffered both domestic outrage and international criticism for covering up and lowering the severity of the epidemic after the first cases were detected in early December 2019. Until January 20, China acknowledged that nCoV was spread from person to person and began to take drastic measures.

An internal speech released in mid-February revealed that the Chinese President knew about the translation about two weeks before he made his first public comment on January 20, asking why Chinese leaders don't work faster to solve problems.

International experts say China could have controlled Covid-19 more easily and quickly, preventing it from spilling outside if officials responded promptly in early January, when the number of cases in Wuhan began. The number of cities has increased, instead of delaying for a few weeks and then frantically blockade the city at the end of the month, when the epidemic appears to be out of control.

However, Chinese state-run media are telling a completely different story after it essentially contained the epidemic. They praised Xi as "the leader of the people" for leading an "all-people war" to repel the disease, showing that China is a model for other countries to follow. China has not detected any domestic cases in the last two days, although dozens of "imported" cases have been recorded.

Goldman Sachs on March 17 estimated that China's GDP could decrease by 9% in the first quarter compared to the same period last year and the GDP for the whole year 2020 is estimated to increase by 3%. Both figures are down from the previous forecast, growing by 2.5% in the first quarter and 5.5% for the whole year. In 2019, China's GDP growth is at 6.1%.

China on March 17 deported its resident correspondents from the New York Times, the Wall Street Journal and the Washington Post, and requested the agencies, together with VOA and Time magazine, to provide details of the operation. , their finance and real estate in China. The action was in response to the Trump administration's request that five Chinese media outlets in the US reduce the number of permanent reporters from 160 to 100 from March 13.

However, Beijing's response level is "unprecedented and incredible," said Jude Blanchett, from the Center for Strategic and International Studies in Washington. "The Chinese message is: We will not play by the old rules."

"The Chinese government believes that Western media deliberately undermines the story of China's great victory in Wuhan," said Victor Shih, an associate professor at the University of California.

"China wants to target both domestic and foreign audiences," said Bill Bishop, who heads a China blog. "On an international level, they want to avoid being blamed for the crisis that is choking many countries. At home, they are showing that the 'outside forces' are the ones who are responsible."

Meanwhile, the US did not handle the crisis effectively. At first, Trump compared nCoV with the flu, and criticized the media and Democrats inflated the danger of nCoV to affect his administration. But nine days later, he changed his tone of voice, declaring at a press conference on March 17 that he had felt it was a pandemic long before it was considered a pandemic.

Experts in the United States have not assumed the role of a global leader when people needed help. Instead, they are struggling because of the lack of a test kit and other equipment, although there is plenty of time to prepare. The number of nCoV infections in the US has increased dramatically in recent days, to more than 14,000 cases, of which more than 200 have died.

"This situation has a major geopolitical impact because the Trump team has not promptly made the necessary moves that every other country has made. The strength and reputation of the United States is weakened to unprecedented levels." , Says Peter Singer, an expert at the New America research organization in the US.

"While we are not doing the most basic things to save our own people, China is supporting medical supplies for other countries. China is doing what the United States used to do and the United States cannot. take care of yourself. This troubled situation will not be forgotten in the international arena, "Singer added.

Therefore, Trump's emphasis on the outbreak originating from China may be intended to distract, making the public less angry about his administration's initial subjectivity. "Both governments benefit politically by being tough," Blanchette said.

Experts comment with such a response, the US - China are missing the opportunity to unite their strength against the common enemy. "They are the first and second largest economies in the world, both of which are dealing with a global pandemic," said Cheng Li, from the John L. Thornton Center in China. "The common enemy is nCoV".

"The crisis was supposed to bring the two rivals together to lead the epidemic response effort, but in reality it seems to be pushing them further," Rapp-Hooper said.