Nashville police heard a recording warning a bomb 'will go off in 15 minutes' and evacuated civilians before the explosion.

Nashville police spokesman Don Aaron said officers quickly went to each building near the scene to evacuate civilians, and sent the demining unit to the scene.

Firefighters said three people with minor injuries were taken to the local hospital.

"Apparently they heard the announcement coming from this car," spokesman Aaron said. 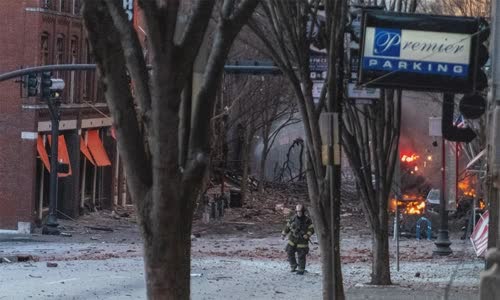 The scene of the explosion in the city of Nashville, Tennessee, USA, on December 25 Photo: Reuters.

The FBI announced its agents were assisting with the investigation and retrieval of information about the explosion from digital media.

Nashville police have not yet said the engine of the explosion.

Shops and offices in the area during the explosion closed on Christmas, leaving no high casualties.

Nashville Mayor John Cooper urged residents to stay away from the downtown area as police and federal authorities investigated the explosion, with assistance from sniffing dogs and security cameras.

Car bombing in the US is rare.