The deal could wipe out US influence in Syria

The sound of celebratory gunfire rang out in Qamishli, when Syrian government troops took over the area that was once under American influence.

As Syrian government military units approached the airport in the border town of Qamishli on October 13, local militias were ordered not to confront them, a Kurdish security official said. This is the first time the Syrian army has appeared on a large scale in this border area since withdrawing in 2012. 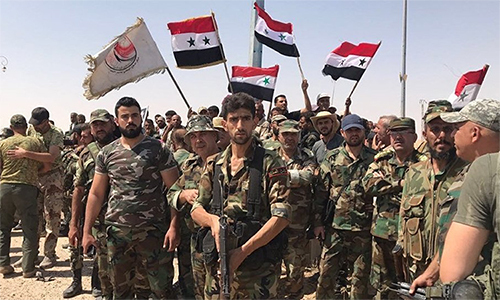 This is the result achieved after three days of negotiations between the Syrian government and the Kurdish forces at a military base with a mediating role of Russia. The deal paved the way for government forces to return to northeastern Syria to repel Turkey's military campaign, while also eliminating the influence the US has worked to build in the region.

"We have reached an agreement with the Syrian government, which is responsible for protecting the country's borders and sovereignty, so that the regular military deployment along the border will help prevent Turkey's attack," the statement said. October 13 report of the Syrian Democratic Forces (SDF), with the core of the Kurdish militia (YPG).

When the civil war broke out in 2012, Syrian army units stationed on the northern border bordering Turkey were ordered to withdraw to protect Damascus, leaving only a small group of government soldiers stationed in Qamishli.

With the void left by the Syrian government in a state of confusion, the Kurdish forces quickly rose and took over Qamishli and many important nearby towns, creating a vast control area at the border, with greed. hope to establish an autonomous region.

Recognizing the capacity and effectiveness of the Kurdish militia in the fight against the self-proclaimed Islamic State (IS) militia, the United States since 2014 has increased its financial support, weapons, and dispatched support teams. Regarding training for the YPG and the establishment of the SDF, a large militia, equipped with modern weapons and good fighting spirit.

With the support of the US Air Force, the Kurds continuously won against IS and became an effective US ally in the war on the ground. The SDF eventually defeated ISIS at Raqqa stronghold and took control of the entire northeast of Syria, from the Euphrates River to the Turkish border.

The cooperation effort with the Kurds over the past 5 years has helped the US maintain a significant military presence in Syria to limit Russian and Iranian influence in the region. A number of Russian mercenaries and pro-Iranian militias are believed to have tried to attack areas with US troops stationed in northeastern Syria, but were repulsed by superior fire and artillery fire.

However, US President Donald Trump's administration abruptly abandoned this policy when it announced its withdrawal and did not interfere with Turkey's military campaign in northern Syria. US Defense Secretary Mark Esper explained that about 1,000 Americans were ordered to withdraw from northern Syria to avoid a conflict between Turkey and Kurdish forces.

"In the past 24 hours, we know Turkey is capable of extending its campaign further south, the original plan was to the west. US forces may be caught between the two opposing forces and that is The situation is very unpredictable, "Esper said on" Face the Nation "on 13 October. 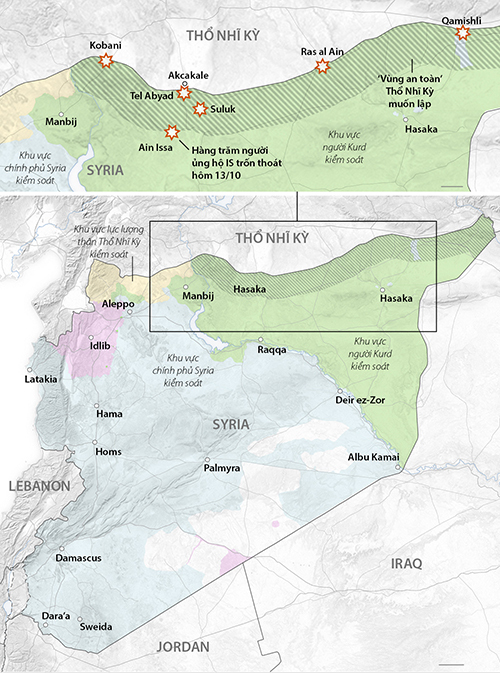 The Kurds living in northeastern Syria say they are stunned by the collapse of the SDF forces tasked to defend the border from Turkey's attack. Senior Kurdish official Badran Jia Kurd said they had no choice but to turn to the government of President Bashar al-Assad for support, after being "betrayed by the Americans".

Recognizing the growing American influence in northeast Syria, Russian officials are said to have actively connected low-level talks between the Damacus and the Kurds. The final agreement was agreed by both sides to open the door for the Syrian army as well as allies Russia and Iran to establish lasting influence in the region.

This is considered a major change in the prolonged war in Syria, helping to strengthen the position of President Bashar al-Assad. Russian and Iranian forces are increasingly important in Syria while the United States is no longer present.

The Syrian government's announcement to send troops to the Kurdish-controlled area to prevent Turkey's military campaign raises hopes of ending the turmoil. A Kurd woman named Nowruz said her family had to flee the fighting three days ago and went to a refuge in Qamishli.

"It is comforting for the government army to deploy forces to the border with Turkey. If we deal with the government to stop this massacre, let it be. We are all Syrians after all." and the Syrian government is Syrian. Americans have betrayed us, we don't trust them anymore, "Nowruz said.

It is unclear where and when the Syrian army will deploy, as well as whether the US has withdrawed its troops completely from the bases. Kurdish government representatives agreed to allow the Syrian army to deploy in Manbij and Kobani, but US officials refused to confirm that the troops had withdrawn from the towns.

Turkey's military campaign in Syria has faced opposition from many countries such as France, Britain and Germany. In response, Turkish President Recep Tayyip Erdogan rejected criticism and calls for a cessation of military operations to negotiate with the Kurdish forces.

"Why is it advisable to sit down and negotiate with terrorists? We do not target Kurdish citizens but do not want a terrorist nation to be established in northeastern Syria. We will continue to fight." translating until the Kurdish forces retreat 30 km from the border, "Erdogan said on October 13.