The risk of violence after the US killed the IS leader

The death of al-Baghdadi leader could push IS and many terrorist groups in the region to promote violence, experts warn.

US President Donald Trump yesterday confirmed the supreme leader Abu Bakr al-Baghdadi of the Islamic State (IS) self-proclaimed detonating the suicide bomb belt when US special forces cornered to a dead end in the tunnel in refuge in Idlib province, northwestern Syria. 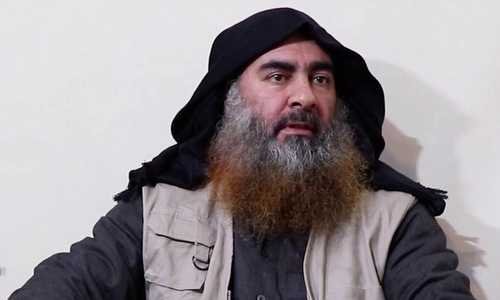 The IS leader appeared in the video in April 2019 Photo: Al-Furqan.

The death of al-Baghdadi is considered an important victory for Trump in the context of his fierce criticism for his decision to withdraw troops from Syria, which risked the rise of ISIS. However, this event may not have much impact on the fight against terrorism, and may even prompt ISIS to launch more bloody violent attacks in the Middle East, many experts warned.

"The death of al-Baghdadi is significant because the US military has eliminated the leader of ISIS, who is also an attractive leader to the rebels, like the previous campaign to destroy Osama bin Laden. However, it also gives new impetus to IS when al-Baghdadi can be considered a martyr for suicide action, "said Michael Maloof, a former Pentagon official.

ISIS captured many territories in Iraq and Syria under al-Baghdadi. They emerged as the world's most violent terrorist organization, far beyond al-Qaeda, with hostage beheadings, suicide bombings, torture and genocide against the Yazidi community in 2014.

Al-Baghdadi himself rarely appears in public. The US-led anti-IS coalition has repeatedly stated that it has annihilated the IS leader, but he continues to send provocative messages to show that he is still alive, even when the IS-controlled land is gradually seized. narrow under the constant military pressure of the US-led coalition as well as pressure from the Syrian government army backed by Russia.

"Studies in Syria show that the majority of civilians join rebel groups to protect themselves, their families and the community, after their lives are turned upside down by foreign counterterrorism campaigns. "The raid on al-Baghdadi's residence could become an inspiration for more bloody violence," warned Middle East expert Nicolas Davies.

French Defense Minister Florence Parly had previously expressed doubts about the importance of the operation, saying the raid had "only eliminated al-Baghdadi earlier than expected, but his organization remained the same." ".

The commander-in-chief of ISIS has not changed much after the death of the supreme leader, especially when he personally selected his successor two months ago. It is most likely Abdullah Qardash, also known as Hajji Abdullah al-Afari, who served under the administration of former Iraqi President Saddam Hussein.

The future of the region will depend heavily on the next IS leader, as well as his charisma and ability to unite internal factions. "IS could merge with al-Qaeda, the terrorist group that this group had cut ties with due to the disagreement between al-Baghdadi and leader Ayman al-Zawahiri," Davies said. a new terrorist power in the Middle East.

The risk of violence after US annihilation of ISIS leader, violence, Middle East, IS leader is destroyed, ISIS leader Abu Bakr al-Baghdadi,
Facebook
Twitter
Tumblr
E-Mail
Pinterest
previous post Driver of 39 bodies in container 'participated in human trafficking from 2018' next post 900 children with HIV because the doctor reused the needle