Former US President Trump is said to be considering when allies urged him to publish videos from security cameras recording the scene of FBI searching Mar-A-Lago mansion.

CNN today quoted the source that the videos collected from security cameras in the Mar-a-Lago mansion were so strictly protected that the former US President Donald Trump's assistants were not sure if he had seen it full. 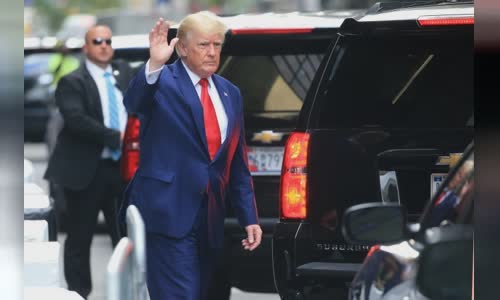 I think those videos are not shared with anyone but lawyers, the source of the news.

Many assistants and allies of former President Trump encouraged him to publicize videos recording FBI scenes to search the mansion, because believing that this move would help the Republican Party.

The proficiency source said there were discussions about the publication of videos this month and advertising them in the style of a media campaign, saying that such a move could reinforce Mr. Trump's statement about

In an interview with Fox earlier this week, when the host Sean Hannity asked if the videos were published, Eric Trump, the son of the former US president, answered that the videos will be released in.

Former US President Donald Trump outside the Trump tower in New York City on August 10.

Another source close to Mr. Trump said the problem is not whether the former president has published a video or not but the time.

However, there are also people of Mr. Trump's group warning if he publicly disclosed these videos, worrying that it could backfire when showing people the large amount of documents that the FBI had gained from the mansion.

FBI agents on August 8 searched the Mar-A-Lago mansion, obtained 11 confidential documents, including 4 documents classified as confidential, and a secret and sensitive document.

The judge in Florida on August 12 publicly reasons for the FBI to search Mr. Trump's house that they suspected violations of the spy law.

The US government has a three -level classification system to protect information that can affect national security if leaked.