The Taiwanese defense force shows the combat capacity when mobilizing the most modern F-16V fighter squadron in the night exercise.

Taiwanese defense forces rehearsed the fighting content with defense and anti -landing content at the base in Hoa Lien district, east of the island, on the evening of August 17.

We always maintain vigilance, implement the concept of 'battlefield everywhere and train all the time' to ensure the defensive capacity in the context of the mainland forces continuously rehearsing in recent years, the agency

The pilot, Taiwanese technician rehearsed with F-16V fighters in Hoa Lien district on the evening of August 17.

The image published by the Taiwan defensive agency shows that the ground-mounted technician is installed with AGM-84 Harpoon, and the mid-range air-to-air missiles AIM-120 AMRAAM and AIM-9 SIDERWIND for F-fighters 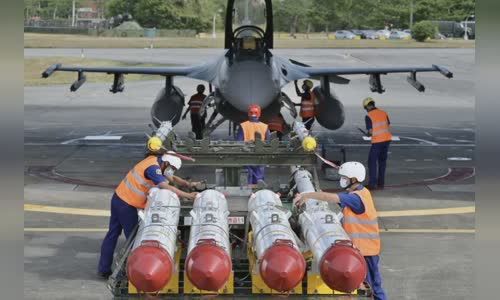 The Chinese military on August 15 announced the organization of the exercise ready to fight in the waters and the airspace around Taiwan.

Taiwanese technicians installed missiles for F-16V fighters during a rehearsal in Hoa Lien district on August 17.

The Command of the Eastern Chinese Army War Zone on the same day shows the video of the KJ-500 early warning aircraft and the Su-30 heavy fighter taken off to perform the task.

Deputy commander of Taiwanese air defense forces on August 16 said that Beijing was conducting information wars to show that they were operating close to Banh Ho archipelago, while denying the Chinese military aircraft imposed application.

F-16V is the most modern fighter in Taiwanese defense force.