Police many countries in collaboration with FBI captured more than 800 drug gang members in 18 countries after a high-tech net campaign.

These gang criminals are arrested in the Trojan shield campaign, in which global law enforcement agencies enter a crime used by criminals and read millions of encrypted messages to conduct a quotation 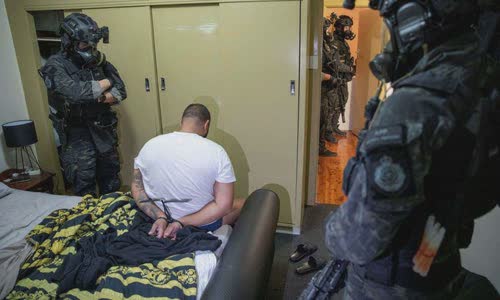 In addition to hundreds of suspects arrested in Australia, Europe, Asia, South America and the Middle East, global law enforcement agencies seized 148 million USD in cash, along with more than 8 tons of banned substances after searching

A suspect was arrested by the Australian Federal Police after a global gang crime campaign to cooperate with the FBI.

Being established in 2018 by Australian police and the US Federal Investigation Bureau (FBI), the Trojan shield is one of the world's largest dedicated network encrypted messaging networks.

Calvin Shivers, Assistant FBI director, said they provided phones designed specifically for criminal organizations in more than 100 countries in the past 18 months, facilitating their operations.

We have grabbed the organized criminal network.

Australian Prime Minister Scott Morrison said the Trojan shield has Christmas a heavy blow into organized crimes, not only in the country but around the world.