The Americans were short after a series of shootings

Hearing the sound of fireworks rang out, the crowd celebrated the National Day in Washington suddenly panicked and flee because it was a gunfire.

The fireworks made families enjoy the National Day of 4/7 along the National Square in Washington feels dangerous. 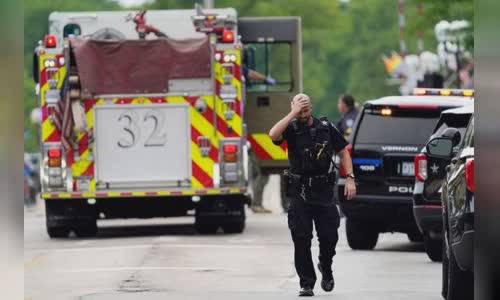 The crowd gathered during the holidays in the center of Orlando city, Florida also startled to flee when hearing the sound.

On the day of gathering to celebrate the community and freedom, we face the tragic losses and horror, Nancy Rotering, Mayor Highland Park, speech after the shooting.

The fear and panic continued to cover the city of Minneapolis, Minesota, when a suspect opened fire at the unofficial fireworks in the park, injuring 8 people.

A policeman hugged his head when he arrived at the scene of the highland Park on the US National Day on July 4.

These events engraved deeper tensions in the US, the country is in a deep division because of the Supreme Court's decision on abortion rights, gun ownership laws, escalating gasoline prices, and sessions.

Many people now feel that there is nowhere to be safe, after the Covid-19 crisis and the deadly police case George Floyd seriously decreased the level of people's trust in the executive force, Thane Rosenbaum.

Commentator Fisher said that the good news was that after a long time of restraint because of the restrictions on Covid-19 stopped, many Americans felt safe enough to go to the street to celebrate the National Day, with parades and peace.

At Washington National Square, Rachael Perrotta and Andrew Hu, two 20 -year -old students, said they had no reason to leave the crowd even when they heard the news of the shooting in Highland Park, and even after his father.

Perrotta said that her generation was emotionless with information about violence, whether shooting or disruptive incidents.

However, the insecurity is still permanent in the crowds attending the National Day celebration across the United States.

Brenda Herrara and Laleh Omaraie, with 26 years old, a teacher from Chicago, attended the celebration at the National Square, said they were always alert at the risk of shooting.

American social networks are filled with videos about the panic crowd to flee when hearing sound like gunfire.

According to the CEO of the Wexler Police Research Forum, the United States has experienced periods of much higher criminal rates and profound political divisions like today, but what is happening is never before there has been.

The case of George Floyd, Ukraine war, suspected election ... these things make people not know who to believe.

Fisher said Americans also lost their trust in each other, as well as with organizations and agencies such as Government, Police, Schools and experts, business leaders, even affecting faith

When there is a risk of something scary, especially in crowded places, the belief that everything will be okay now, expert Rosenbaum said.

However, Wexler said that this could be an opportunity for US police to rebuild the public confidence.

According to experts, in the context of chaotic information that is spread almost immediately on social networks, quick feedback from police and officials is the key to soothing or preventing panic.

It was the delayed reaction and lack of police information that caused fear and loss of faith in the tragedy in Uvalde, Wexler said that mentioning the shooting at Robb Primary School, Uvalde City, Texas,

The shooting of the National Day parade increased tensions in the country that was divided by abortion rights, gun ownership and a series of problems.

The shooting occurred near the Benjamin Franklin Park in Philadelphia on July 4, injuring two officers and the crowd of people panicked.