The 'god of the god' of Ukraine artillery

Thanks to the UAVs like the eye, Terra reconnaissance team has instructed the exact target for Ukraine artillery to raid the Russian forces.

Shoot, an commander of the reconnaissance unit after receiving the signal from the artillery team. 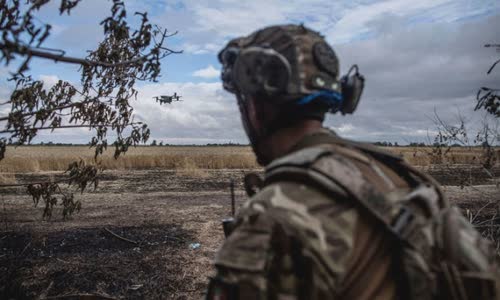 A Ukrainian soldier controlled the drone to determine the position of the Russian artillery in Donbass.

Can see a bunch of black smoke on the image transmitted by unmanned aircraft, before the reconnaissance team heard the sound of artillery shells.

This is how the fights have been happening in recent days in Ukraine.

Abdulla, the commander of the Terra platoon, was responsible for reconnaissance by UAV, moving the coordinates to the next shelling.

Just a few minutes earlier, Abdulla, 33, and the platoon members had to go down to their shelter when Russia discovered their UAV and shot them towards them but did not cause damage.

We have a very different type of fighting, Abdulla said.

When I participated in my first campaign, I despised the UAVs, thinking that I had to carry a gun on my shoulder, looking for enemies as a true man, he said.

Although UAV has appeared for decades, the level of use on the battlefield is a unique point of Russia - Ukraine conflict.

But Ukraine also has its own supervisory UAV models, Leleka and Furia, along with the Bayraktar TB2 armed aircraft manufactured by Turkey, playing an important role in destroying Russian armored vehicles.

The more popular on the front line is commercial UAVs, such as China -made 4 -wing -made DJI aircraft. 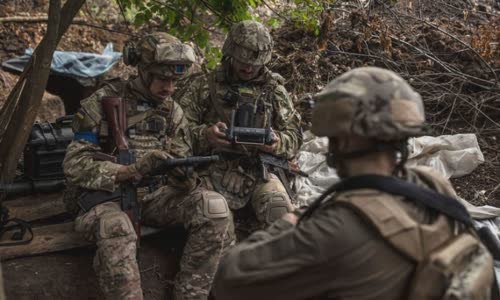 They have become the eyes of units on the front line, Alex, who used Ukraine's UAVs on the battlefield of Lysychansk in Donbass, emphasized.

He said the ability to interference and strong electronic warfare of Russia in Donbass disabled the GPS navigation system used by most other UAVs, but could not interrupt the operation of 4 -wing aircraft.

Reconnaissance soldiers from the Terra platoon controlled the drone to transfer the shooting coordinates to the Ukrainian artillery teams.

To confront a stronger and better opponent, the Ukrainian army must become flexible and creative, taking advantage of all possible resources.

Most members of the Terra platoon, coordinated with a battle with a infantry brigade on the Mykolaiv Front, used to be the people working in Kiev.

On the recent day, Abdulla and three other soldiers, carrying guns, two UAVs and backpacks full of backup batteries, together on a pickup.

The pickup truck runs to the south of Mykolaiv, weaving through the artillery holes on bumpy roads, passing through the deserted villages after months of fighting.

At a forest strip is considered one of the gathering places of the unit, Abdulla, Zhora and Thor jumped out of the car and ran under the trees when the pickup quickly retreated to avoid being avoided by Russian drones.

Upon arrival, Abdulla opened a signal transmitter and created an internet connection.

Zhora started his mission with a DJI Mavic 3, controlling it to invade the Russian force control.

Based on the image obtained by the UAV, Zhora studied the location of Russian trenches and defensive locations, identifying priority targets, such as firecrackers, tanks or ammunition.

It would be a great victory if it hit it, but it ran too fast, he said when he pointed to the car carrying Russian Grad rocket launch on the road in the distance.

A minute later, Zhora discovered another car from the Russian side, maybe an armored ambulance, moving from the position. 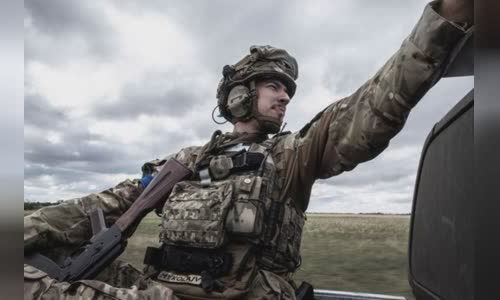 There was no easy option and Abdulla decided to focus on Russia's fortifications, where the armored vehicles were parked under thick concrete panels.

However, the tactics were given more complicated.

Here, we play the 'cat and mouse' game every day, Abdulla explained.

The Russian forces also continuously shelled on Ukraine's positions for the same reason.

As soon as the UAV returned from the first spy, a series of explosions from the Russian artillery rang out.

They didn't know where we were, Abdulla said.

Calling from Chien Hao, he suggested that Ukrainian artillery team in the back prepared to fire in 30 minutes.

The day before, Ukraine's artillery shells hit the forest where Russian soldiers hide.

The next day, Abdulla said that thanks to the guided information that his group provided, Ukrainian artillery firepower hit a Russian infantry fighting car and then continued to attack as Russian soldiers appeared from

A member of the Ukrainian reconnaissance unit returned after doing duty on the front line.

When the Russian fire responded, Abdulla's team shifted and ended the mission of the day.

Maybe they were about to run out of bullets, Abdulla said.

Packing UAV, the group quietly waited when the pickup truck rushed up from the back, drove them out of the front in the blink of an eye.