The Middle East Tourism trip was disappointed by Mr. Biden

Mr. Biden visited the Middle East with the ambition to cool down the oil crisis and tighten regional relations, but did not seem to achieve any goals.

Before arriving in Saudi Arabia, US President Joe Biden knew it would face many difficulties. 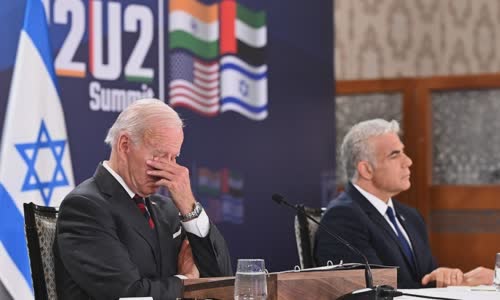 However, he still bet on the visit to the Middle East, hoping to ease tense relationships, reaffirm to Arab leaders that the United States is still attached to security and stability in the region.

President Biden also came to Saudi Arabia to seek solutions to one of the top US political issues: gasoline prices increased.

The visit to the Middle East of Biden took place in the middle of a record high gasoline price, inflation soared in the US and around the globe, partly due to the conflict of Russia - Ukraine.

But after a separate meeting with Crown Prince Saudi Mohammed bin Salman and the meeting with the Gulf Cooperation Cooperation (GCC) on July 16, Mr. Biden left to return to Washington without any official announcement of increased productivity.

US President Joe Biden (left) and Israeli Prime Minister Yair Lapid at a meeting in Jerusalem on July 14.

When asked about this result, the US President still thinks that regional leaders will soon act when the next meeting of OPEC+ will take place in early August. I hope to see the next steps in a few.

However, observers believe that the US president seems to be too optimistic.

After the visit, Amos Hochstein, a high -level adviser for energy security at the US Department of State, believed that the Gulf countries would increase the oil production after the visit of Biden and the price of gasoline in the US could decrease further,

However, Hochstein does not specify which countries will increase oil production or increase.

When choosing France as the first destination, Mr. Mohamed seemed to be sending a signal to the US: We did not rush to meet Washington's requirements at all costs, Anne Gadel, expert on the Middle East and North Africa of the Research Institute.

Other goals during the visit to the Middle East of Mr. Biden did not seem to achieve results.

The US president tried to revive the Iran nuclear agreement that his predecessor Donald Trump had withdrawn in 2018, when he faced the increasing pressure from Israel, the key ally in the Middle East, in order to make an alkaline plan.

I continue to believe that diplomacy is the best way to achieve this result, Mr. Biden said on July 14.

Israel is skeptical with this policy of the US.

Words will not stop them.

François Picard, a commentator of Daily Beast, said that another goal that Mr. Biden targeted on the Middle East tour was to convince Saudi Arabia to support Ukraine, and join the West in an effort to increase pressure on the pressure on

In the article on Global Times on July 17, Zhu Weilie, Director of the Middle East Research Institute at Shanghai International Research University, said that Mr. Biden returned to his hands after a 4 -day trip in the Middle East,

After Biden repeatedly criticized Russia before and during the trip, Saudi Foreign Minister Saudi Faisal Bin Farhan said on July 16 that Riyadh would continue to strengthen the partnership with the parties.

The United States is still our main strategic partner, but that does not mean that we cannot develop strong relations with other countries around the world, Farhan said.

Zhu Weilie said that it was difficult for the US to leave Russia out of the Middle East, not only because Moscow was strongly present there, but also because the country shared a close energy relationship with other countries in the region.

Biden's visit to the Middle East even sent an alarming signal to countries in the region, when they were concerned about the risk of being dragged into greater conflicts between powers, Zhu said.