The FBI may apply for a search from a judge to raid Mr. Trump's mansion when he needed to accelerate the investigation without notifying the White House.

Former US President Donald Trump on August 8 announced that the Federal Investigation Department (FBI) raided his Mar-A-Lago mansion in Florida and broke a safe. 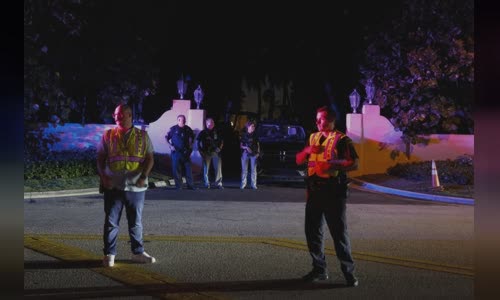 According to NY Times, the federal executive force will apply for a search order when it is necessary to act quickly in an investigation, or worry that sensitive evidence is at risk of being shifted, concealed, modified or destroyed.

The search command is not a sign that someone has committed crimes, but it shows the urgency of the investigation.

The US Department of Justice or FBI has no right to issue a search command, but only propose.

In the process of considering the proposal on the search orders, the judge often requested the investigating agency to clearly state the scope of the search, in order to protect the citizen's rights before the acts of searching and seizing wrong assets.

Palm Beach police and FBI agent in front of the Mar-A-Lago mansion by former President Donald Trump in Palm Beach, Florida, on August 8.

The executive agency needs to meet certain legal criteria before a judge approves the search order.

In addition, the search proposal should describe the location and nature of the raid thoroughly to prevent agents from applying the wrong purposes and ransacking outside the specified scope.

Guardian quoted former FBI officials as saying that the agency was approved by the Federal Judge in West Palm Beach, Florida, the search order of Mar-A-Lago because they have proven that Mr. Trump is likely to be capable.

The US National Archives (Nara) said that Mr. Trump illegally brought 15 boxes of items, which contained many confidential documents, from the White House and stored in the wrong regulations in Mar-A-Lago.

A executive official told CBS that the Secret Service Department, the former President Trump protection unit, was informed immediately before the search order was conducted at about 10h on 8/8 (21h Hanoi time).

Some document boxes were taken away by the FBI agents, but there was no door in the mansion when the raid ended in the afternoon of the same day.

A senior White House official said the President Joe Biden's administration was not informed about the FBI search and only knew about the raid through social networks and Mr. Trump's statement.

Mr. Biden also announced not to participate in the issues of the US Department of Justice.

The US Department of Justice, the FBI Headquarters in Washington and the office in Miami, Florida, all refused to comment on Mr. Trump's search search, because the investigation was taking place.

Former President Trump said that the FBI agents raid his mansion at the Mar-A-Lago Club and broke the safe, but unknown the purpose.

The Republican Party of the Ministry of Justice of American Justice weapons political weapons while the Democrats think Trump needs to be responsible for his mistakes.