Xi's speech at the opening ceremony of the Party Congress did not have many new messages, mainly emphasizing his vision and development orientation.

The National Congress of the Chinese Communist Party (CCP) opened this morning at the people's ceremony in Beijing with the highlight of the speech of 45 minutes of President Xi Jinping. 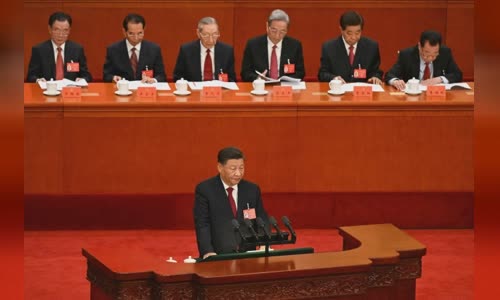 Observers evaluate Xi showed a confident tone throughout the speech, emphasizing China's growing strength in the great revival effort of the country.

The past 5 years of description is very abnormal and extraordinary, Chinese President said the Party has led the country and people to overcome the difficult and complex international situation, as well as the risks and challenges of big.

Chinese President Xi Jinping spoke at the opening ceremony of the 20th National Congress of the Chinese Communist Party in Beijing on October 16.

The first challenges that Xi mentioned were Covid-19 pandemic, the issue of Hong Kong and Taiwan.

Emphasizing that the non -Covid policy is essential, he said that China has maximized the lives and health of the people before the deadly virus.

He once again defended the non -Covid policy, affirming its importance in saving millions of people, Steven Jiang, in charge of CNN office in Beijing, commented.

Regarding the issue of Hong Kong, the Chinese leader affirmed that the special zone has moved from chaos to order and thrives under the management of patriots.

The Chinese President emphasized that the country did not give up the use of force to recover Taiwan and will take all necessary measures to prevent the separatist movement on the island.

Observers said that Xi's comments on Taiwan reflects that China considers this as the core benefit of this country.

Xi's speech about Taiwan has been predicted and in accordance with the comments that we have heard before, Lev Nachman, Associate Professor of Chengchi National University in Taipei and analyst on the radio.

There is really nothing new in his statements about this issue, but what impressed me was the applause of everyone there.

In the opening speech of the Congress, Xi also emphasized the rapid changes of the international situation, referring to the increasing tensions between China and the US and its allies, but not directly mentioning the US.

He welcomed China's assertive approach, saying that the country has raised the spirit of struggle and uphold the national dignity and core benefits in the struggle.

Xi noted that there are errors and some difficulties and obstacles, but will make more efforts to solve.

Scott Kennedy, a senior analyst at the International and International Center for Strategic Research in Washington, pointed out that from the struggle, Xi mentioned more often in his speech compared to the reform.

To face the challenges ahead and protect national sovereignty, Chinese leaders also mentioned the nation's policy direction in the coming years, emphasizing the request to strengthen the military strength.

Xi is committed to accelerating efforts to build the People's Liberation Army of China (PLA) to become a world -class military, improving the ability of PLA in protecting the country's sovereignty.

In addition to strengthening military power, Chinese leaders said it would focus on high quality education and renew the economy growth.

Innovation will still be the focus of modernization motivation that China pursues.

Xi praised China's efforts to accelerate their efforts to achieve more self -reliance on science and technology, meeting China's strategic needs of research in key areas.

There are many familiar topics in this speech, because the big goals of China were outlined at the Congress 5 years ago, expert Dali Yang commented, but added that he was impressed with his man.

For the first time at the Party Congress, Xi mentioned the goal of balancing development and security.

According to observers, since 2002, Chinese leaders spoke at the Party Congress that China has stated that China is in a strategic opportunity for development.

However, this phrase does not appear in Xi's speech this year, although he mentioned it in 2017. Experts think this may be a sign that Chinese leaders feel insecure about love

Xi also repeated the Chinese dream, committed to the policy that he constantly promoted since the year of the Rights in 2012. We all have to be loyal to the basic purpose of serving the people.

He affirmed that realizing that dream was to restore glory in the past and the position of a global superpower that China deserves.

Through continuous struggle, we are gradually realizing the dream of thousands of generations of a moderately prosperous Chinese country, Xi said.

China under Xi took millions of people escaping poverty, bringing spacecraft to the moon and fulfilling a commitment to cut emissions.