America Biden accused the President of surrendering to Covid-19, and Trump asserted that his pandemic and economic policy was superior to Biden.

Democratic presidential candidate Joe Biden continued to criticize Donald Trump for accusing the US President's administration of failing to deal with Covid-19, when he campaigned at the Republican stronghold in Georgia.

While the former US vice president seeks to broaden the scope of his campaign to increase his chances of winning each state, Trump moves into the Midwest in a last-ditch effort to win support in abandoned states.

Speaking at Warm Springs, Georgia yesterday, Biden, who is leading the way in public opinion polls, dwells on Trump's response to Covid-19, reminding voters that Trump's Chief of Staff Mark Meadows has just

Biden saw the response as a "surrender" by the White House, showing that the Trump administration "never really tried" to stop the pandemic that killed more than 226,000 Americans.

Instead of acting like a wartime president against Covid-19 as promised, Trump just "shrugged, boasted, and surrendered," Biden said.

"I am here to tell you: We can and we will take control of this virus," he stressed.

Trump once beat Hillary Clinton by 5 points in Georgia in 2016, but current polls show that the 74-year-old President is behind Biden.

Georgia last voted for a Democratic candidate almost 30 years ago, when it elected Bill Clinton in 1992. Biden's campaign had high hopes of winning the state as well as winning two seats in Upper. 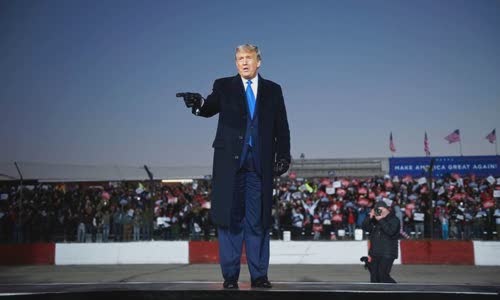 Biden, 77, held a socially outrageous campaign in Atlanta, Georgia's largest city, where he repeated similar attacks on Trump, while also calling on voters to recognize.

"Winning in Georgia is winning on all fronts!"

Meanwhile, Trump maintained the pace of his vigorous movement, holding an outdoor rally in Michigan and a similar event in Wisconsin.

Both states are battlefield states in the Midwest that he once won with a narrow gap four years ago, but Trump insists "we are leading on all fronts" thanks to his aggressive campaign schedule.

"I have to say I'm curling my ass up to work here!"

Trump asserted that his policies to deal with pandemic and economic recovery were superior to Biden.

Trump dismissed the poll results in his Twitter post yesterday, accusing the media of focusing only on "Covid, Covid, Covid" to adversely affect his chances of re-election.