Biden had a hard time fixing America, but he easily pushed his policy forward when Democrats controlled the bicameral.

After the US Congress officially certified Joe Biden's victory, the inauguration on January 20 is the only procedure left for him to take over the White House. 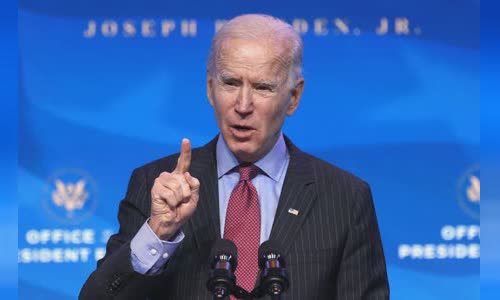 Republicans and Democrats both now hold 50 seats in the Senate, but Democrats will gain control because Vice President-elect Kamala Harris, who will be the President of the Senate, has the power to vote on the

Sharing with VnExpress, Dr. Ted Gover, foreign policy expert and director of the Governance Program for Native Americans at Claremont Graduate University in California, judged with this absolute victory, Biden and the party.

The Democrats' bipartisan control would make it easier for Biden to push for personnel options for higher-level positions, but it doesn't mean Biden can do everything he wants.

In the House of Representatives, Democrats are only 12 seats ahead of Republicans, which has the potential to limit the trillion-dollar ambitions Biden set in its 2020 campaign to expand health care and reduce economic inequality

Problems from 2020 and riots in the US congressional court on January 6 will overshadow Biden's term.

Although vaccines are being deployed, Covid-19 still kills thousands of Americans every day.

While Trump may blame Covid-19 for economic problems, Biden will be the one to be focused on whether he comes up with an effective policy to revive the economy in 2021.

Trump has been a "hard-to-play" opponent as he has shown tougher views on Beijing than many other US presidents.

The riots that killed 5 people on January 6 were called "the darkest day" in the country's history by some US newspapers.

"Biden will need to begin a decades-long process for the cooperation of opposing parties and voters who believe the 2020 election has been stolen from Donald Trump," Gover said.

"Perhaps Biden's biggest challenge is overcoming the polarization that is damaging American democracy, especially the populist, anti-democratic forces that hold a great deal of influence within the Republicans," Hankla admitted.

However, Gover argues that Biden has a chance to change the American political climate, shifting from Trump's acrimonious style to a more conventional compromise approach.

The Capitol Hill riots were likely to force Biden to step up a reassertion of democratic norms that were often ignored by Trump.

One positive point for Biden is that the riot can keep peaceful supporters away from Trump, as the President is seen as an inciting riot.

The riots posed a foreign challenge to Biden.

Gover argues that Biden-era American diplomats will have a hard time defending US interests abroad and speaking out about human rights and governance standards in other countries.

"The January 6 riots provoked by Trump will haunt US diplomacy for years, seriously complicating Washington's efforts to promote democratic and human rights standards," he said.