The Battle of British soldiers burned down Capitol Hill in 1814

The January 6 riot caused by Trump supporters is not the first time Capitol Hill has fallen.

Hundreds of protesters who supported President Donald Trump on January 6 stormed the parliament building, killing at least 5 people, including a police officer. 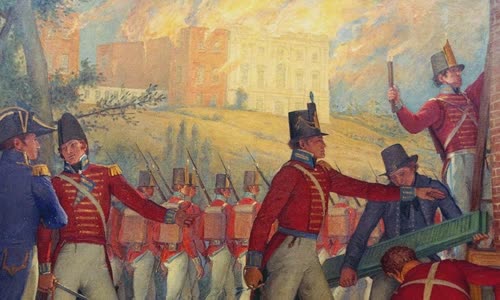 A painting of British troops burning buildings in Washington City in 1814 Photo: Wikipedia

In the early 19th century, conflicts between Britain and the United States broke out after London adopted policies that obstructed Washington's trade such as harassing ships at sea and even forcing American sailors to serve in the British navy.

After being elected US president in 1808, James Madison asked Congress to prepare for war with Britain.

On August 24, 1814, British troops under the command of General Robert Ross entered Washington city, now Washington, after defeating the Americans at the Battle of Bladensburg.

The Washington defenders were quickly defeated due to many tactical mistakes as well as the good combat of the British.

When he approached the city, General Ross ordered British soldiers to beat drums to signal the US commander to discuss the terms of surrender or truce, but no response.

The British burned a total of 10 government buildings including the War Department, the Treasury Department, the Executive Building (the White House today) and the Capitol Hill.

At that time, Capitol Hill was still under construction, but the British army found enough materials and gunpowder to set the interior of the building to fire. 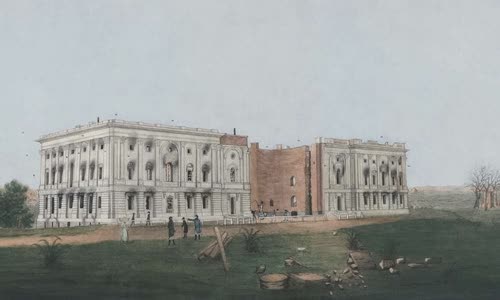 Painting of the US parliament building after being burned by British troops Photo: Wikipedia

Most of the US parliament building was built of non-flammable materials such as iron, marble, and sandstone, but the heat of the fire was so great that it melted the glass skylights, destroying the sculptures.

On August 25, 1814, a thunderstorm rained down on Washington City, helping to extinguish the fire but still causing hundreds of thousands of dollars in damage.

On December 24, 1814, British and American representatives signed the Treaty of Ghent in the city of the same name in the Kingdom of the Netherlands, in present-day Belgium.

News of the deal passed to American forces under the command of future President Andrew Jackson just before their victory in the Battle of New Orleans on February 12, 1815.

Rebuilding of Capitol Hill began in late 1815 and lasted until 1826. The parliament building was further expanded in 1850, while the roof was added five years later.

In 1958, Capitol Hill was expanded once more and became a symbol of "inviolable" democracy of America, until it was infiltrated by a crowd of protesters supporting President Trump.