The world recorded more than 90.6 million cases and more than 1.9 million deaths due to the nCoV, German Chancellor Merkel warned that the coming weeks will be "the hardest". 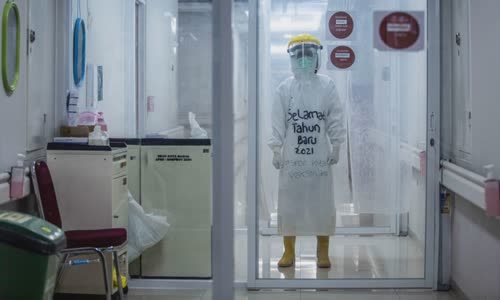 Merkel said that "the coming winter weeks will be the most difficult period of the pandemic" since the outbreak, when German doctors and medical staff have been overworked.

The nation of 83 million people previously imposed a new round of restrictions to increase social disparity and help hospitals cope with the spike in patients.

Like other EU countries, Germany started to inject Pfizer - BioNTech Covid-19 vaccine for citizens against the end of December. To date, more than half a million Germans have been vaccinated.

Indian Prime Minister Narendra Modi announced on January 9 that the country would launch one of the world's largest batch of Covid-19 vaccinations from January 16, aiming to reach the target of 300 million people vaccinated by month.

The vaccine will be made available to 1.3 billion Indians free of charge, and Prime Minister Modi added the vaccination program would be "an important step" in fighting the pandemic.

On January 3, India's Drug Administration approved two Covid-19 vaccines for emergency use, one developed by the pharmaceutical company AstraZeneca in collaboration with the University of Oxford, UK, and the other.

Brazil, the third largest epidemic region in the world, recorded an additional 443 deaths from Covid-19, bringing the total number of deaths to 203,100.

Experts warned that Brazil has yet to see a spike in nCoV cases, as a result of the Christmas and New Year gatherings with friends and family.

Russia, the fourth largest epidemic region in the world, recorded an additional 22,851 nCoV infections and 456 deaths, bringing the total number of infections and deaths to 3,401,954 and 61,837 respectively.

Russia deployed the Sputnik V vaccine in the national vaccination program in early December 2020, focusing on the high-risk group.

He said on January 10 that they had raised $ 1 billion from global donors to help "vulnerable countries" get access to the Covid-19 vaccine.

UK Health Minister Matt Hancock announced the same day that all adults in the UK will be vaccinated with Covid-19 in the fall, in the UK's largest ever vaccination campaign.

Buckingham Palace announced that Queen Elizabeth and her husband, Duke of Edinburgh Philip, had been vaccinated with Covid-19 on January 9.

France is currently criticized for its slower deployment of the vaccine than in other European countries.

The Korean government imposed restrictions such as banning gathering of more than 4 people, suspending ski resorts and indoor sports facilities until January 17.

Indonesia has banned all visitors from the UK and tightened rules for people from Europe and Australia to limit the spread of the virus.

Indonesia's Health Minister said the country is expected to vaccinate 181.5 million people, about 67% of the population, to achieve community immunity.

The Philippines reported 487,690 cases and 9,405 deaths, an increase of 1,960 and 8 cases respectively, making it the second largest epidemic area in the region.

Philippine officials said on January 10 that the country had secured 30 million doses of Covid-19 vaccine developed by the US pharmaceutical company Novavax.

Thailand recorded an additional 245 cases of nCoV infections, bringing the total to 10,298, of which 67 died.

Thailand's Covid-19 Coordination Center warns that the number of new infections per day could rise to more than 10,000 by the end of this month if the government does not impose more stringent measures to limit the virus.