"These conspirators are the best at stimulating people's emotions from behind the scenes, as they do in Hong Kong," wrote the Global Times newspaper of People's Daily, the Communist Party's mouthpiece. in the article published on February 8. 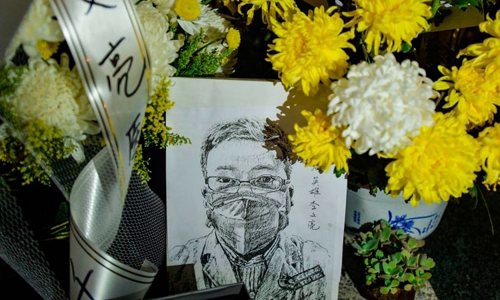 Place to place flowers to commemorate Dr. Li Wen Liang at a hospital in Wuhan, China on February 7 Photo: AFP

The newspaper argues that taking advantage of the death of Dr. Lee, who is considered a hero for early warning of an acute coronary pneumonia (nCoV) pandemic, to provoke anti-government sentiment is a part of separatist group strategy.

Li Wen Liang, an ophthalmologist at Wuhan Central Hospital, died on February 7 from nCoV infection. Previously, Li had sent a message to a chat group of 150 doctors to warn about cases of virus infections that he thought were similar to SARS (severe acute respiratory syndrome).

However, the 34-year-old doctor was immediately summoned by city officials and forced to sign the minutes with the content "spreading false information seriously disturbing social order". After his death, numerous Weibo users expressed their sadness and anger, asking the Wuhan authorities to apologize and demand freedom of speech.

The authors of the Global Times acknowledged the public's wrath for Dr. Ly's treatment, but the article said he was almost not a political dissident, but a Communist Party member who claimed Dad will join the frontline against the disease after recovering.

The outbreak of acute pneumonia caused by nCoV in Wuhan City, Hubei Province, central China since December, has spread to 26 countries and territories, causing 813 deaths and more than 37,000 infections. The World Health Organization (WHO) declares it is a global emergency and has sent a delegation to China.