Deputy generals "cover" for Trump in the midst of the crisis

Mike Pence left Washington for key states to lobby, as he became the "line" between President Trump infected nCoV and Democrats.

The trip of US Vice President Mike Pence started on October 5 and is expected to last 4 days, with the first destination being Utah. 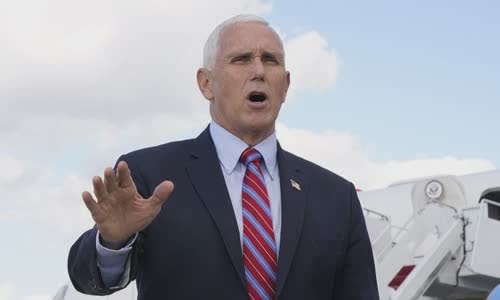 US Vice President Mike Pence responded to the press at Andrews Air Force Base, Maryland, on October 5 Photo: AP

Over the past few months, Pence has been campaigning mostly in small and under-noticed communities, greeting roadside voters or talking to workers at the "Lightning Belt", a term for the Midwest states.

However, he is expected to be in the spotlight this week, as the debate with Democratic vice-presidential candidate Kamala Harris is scheduled for October 7.

According to Politico commentators Gabby Orr and Anita Kumar, Trump's "deputy" is betting everything on a last-ditch effort to hold seats for both him and the US president.

Pence is considered by many to have a more serious view of the pandemic than Trump.

However, there is an opinion that Pence is not serious enough in the pandemic response.

Some are also concerned about Pence's decision to fly to multiple states to campaign after Trump became infected with CoV, pointing out that the Vice President's protections during the campaign are similar to those that did not help him

Scott Jennings, an assistant to former President George W. Bush, said that Pence should stay in Washington and keep cautious, because according to the 25th Amendment to the US Constitution, a president is temporarily handed over operations to

Pence and his wife Karen have repeatedly received negative results for nCoV since Trump announced that he and his wife Melania were infected with the virus on October 2.

Despite the risks, Trump's campaign seems deeply to Pence to help them carry out "The Great Return of America" campaign.

"We are not active in fear. The President's recovery has made incredible progress, while the Vice President is healthy and working non-stop. The direction is seamlessly well established.

Trump's campaign on October 3 announced that Pence will host a campaign event in the city of Peoria, Arizona, on October 8, the day after a debate with Harris.

"The vice president is tested every day, a crucial element in the advocacy journey. We will host events via both digital and live platforms, maintaining the safeguards they take.

In a phone meeting on October 3, Pence was optimistic, encouraging the staff and volunteers working on Trump's campaign across the country, urging them to continue moving forward in the

The US vice president maintained his characteristic respect for Trump throughout the meeting, praising the White House boss for responding quickly to the pandemic to a ban on most people entering from China earlier this month.

"When I have been traveling around the country so many times in recent days, I have said that President Donald Trump has never stopped fighting for us. Now it's our turn to fight for him," Pence said.

Pence also conveyed Trump's message to employees about their duties in the fight against Covid-19.