Mexican protesters occupy the dam, protesting water sharing with the US

Mexican farmers and ranchers occupy the La Boquilla Dam in the northern state of Chihuahua, in protest against sharing water resources with the United States.

Clash broke out between protesters, consisting mainly of farmers, ranchers and soldiers from the Mexican National Guard. 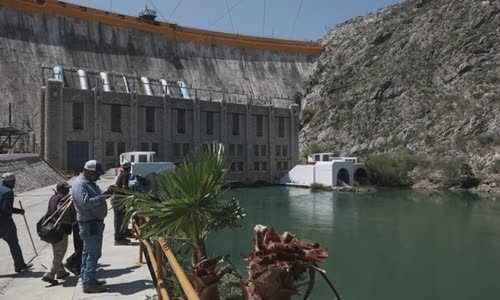 Farmers stood at La Boquilla Dam after taking the project on September 8 to protest against sharing water with the United States Photo: AP.

Demonstrators and state officials complain that the administration of Mexican President Andres Manuel Lopez Obrador is transferring too much water to the US despite it exposing Mexican farmers and ranchers to drought.

"We will protect our water to the end," said Alejandro Aguilar, 57, an onion and tomato farmer in Chihuahua who joined the protest.

The La Boquilla Dam until 9/11 was still controlled by protesters amid rumors that the federal army was ready to attack to retake this strategic facility.

Thousands of people, carrying sticks and Mexican flags, have flocked to the La Boquilla Dam.

In the end, the larger military decided to retreat, a move President Lopez Obrador called "cautious action", and the protesters occupied the dam.

President Lopez Obrador denied that farmers in Chihuahua were dehydrated, accusing his opponents of inciting "a rebellion" with political motives.

"We must adhere to the agreement," Lopez Obrador told reporters, insisting that this job never leads to water shortages, both now and in the future.

Mexico is working hard to supply the US with water after failing to fulfill last year's contribution.

Lopez Obrador once expressed concern that President Trump could retaliate if Mexico does not pay off its country's debt.

The treaty requires Mexico to supply water to the United States on a five-year cycle.

In recent months, Mexico has tried to fulfill its obligations by opening dams and discharging water into rivers that flow into the Rio Grande.