The White House describes Trump as "the most examiner in America" and often uses this "mantra" to disprove criticism of the President's loose precaution.

Ultimately, routine testing has proven inadequate to protect the President and aides at the White House, as Mr Trump, First Lady Melania and a host of close-up advisers are virus-positive. 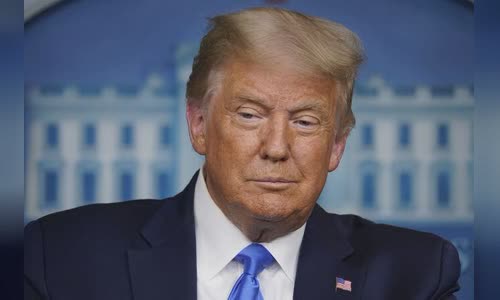 The test spell did not protect Trump from Covid-19 Photo: AP

Trump is proof that the test is not the "mantra" that creates a "bubble of safety".

Since the outbreak, Trump has made conflicting statements about the mask, insisting that federal health experts recommend it, but added that "I don't think I'll do it"

Last week, he mocked rival Joe Biden on the subject.

While the White House ignores wearing masks, they insist on the test factor.

"He tests more than anyone, many times a day. We believe he is acting accordingly," White House spokeswoman Kayleigh McEnany said in July. McEnany was positive for nCoV.

A negative test result sounds reassuring, but it does not necessarily show that the person tested is not infected with nCoV or infecting others.

There are other reasons for false negatives such as errors in the testing process or poor sampling methods.

"Remember that the test only detects the presence of nCoV when there is enough viral material in the body. No test detects the virus immediately after infection," said John Koval, Abbott spokesman.

"Testing alone does not stop the disease from spreading. It must be combined with wearing a mask, washing hands, standing two meters apart and avoiding crowds," says Cyrus Shahpar, a former CDC scientist.

Health experts advise people to social distance, but that recommendation has been ignored in recent White House events, most notably Trump's Republican nomination acceptance speech on the Lawn

"Rapid tests have limitations, relying on it gives the White House and staff the illusion that they have the virus under control," said William Schaffner, professor of infectious diseases at Vanderbilt College of Medicine.