President Trump suspended talks about a new stimulus plan that came after the election, accusing Democrats of bad faith.

"I have instructed my representatives to stop negotiations until after the election," US President Donald Trump wrote on Twitter on October 6. 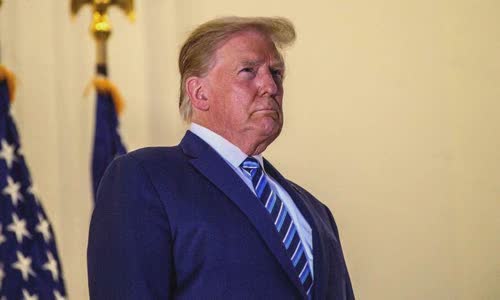 US President Donald Trump returned to the White House from the Walter Reed Military Medical Center on October 5 Photo: AFP

"Nancy Pelosi is asking for $ 2.4 trillion to support underperforming states, high crime rates that Democrats control, money that has nothing to do with Covid-19," Trump said.

The US president added that if he wins the November election, he will work with Congress to "pass an important stimulus bill that focuses on hard-working Americans and small businesses".

The two sides are trying to reach an agreement on the size of the new stimulus package, after provisions under the Cares Act to support the economic affected people by Covid-19, worth $ 2.2 trillion, were passed.

"Today once again President Trump exposes his true nature of putting himself above the country's efforts, with the complete consensus of Republicans. It is clear that the White House is getting it all right.

Democratic presidential candidate Joe Biden also accused the White House boss of "turning his back on all workers who have yet to find jobs".

Trump's decision made in the context of the US presidential election day is less than a month away.