US Army Secretary McCarthy warned there were still many threats left by "potential terrorists" before and during the day Biden took office.

"Army Secretary Ryan McCarthy revealed the Pentagon was aware of the threats posed by potential terrorists during the period before and during Inauguration Day. The US Department of Defense is working with forces. 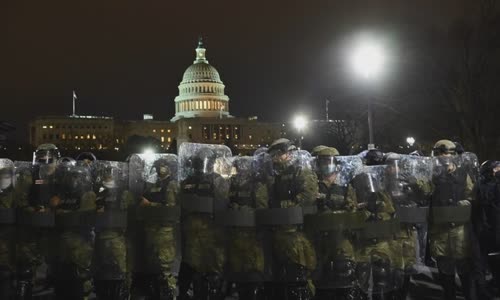 Police riot outside Capitol Hill on the evening of January 6 Photo: AFP

Hundreds of protesters supporting President Donald Trump stormed the parliament early in the afternoon of January 6 (morning 7/1 Hanoi time), causing the meeting to certify the results of the National Assembly's electoral votes.

The US military drew criticism for not providing timely support to law enforcement to stop the protesters from happening.

The Army Secretary on Jan. 8 said the Pentagon "was not involved in any emergency planning or plan" in terms of security in Congress, adding that all support duties of the military

McCarthy announced that the National Guard of the District of Columbia would significantly increase its forces and additional security measures in the area.