Chinese soldiers will go to Russia to rehearse

China announced that the country's soldiers would come to Russia to participate in the joint exercise of Vostok with India, Belarus, Mongolia, Tajikistan and some other countries.

China's Ministry of Defense today announced the rehearsal with Russia as part of the bilateral annual cooperation agreement. 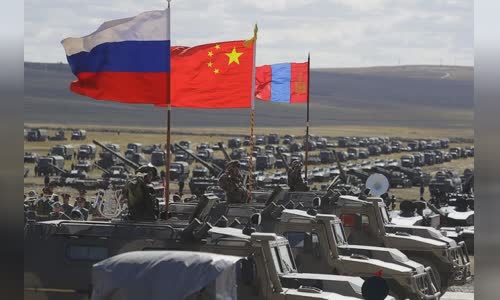 The goal is to further deepen the friendly and practical cooperation with the army of countries to participate, improve the level of strategic cooperation between the parties and increase the ability to cope with security threats and threats.

The Russian Flag, China and Mongolia in the Vostok exercise in 2018. Photo: AP.

Russia last month announced the plan to organize a joint exercise Vostok from August 30 to September 5 in the East with foreign forces but did not specify countries.

China and India were two major economies without pressing Russia's sanctions, even increasing the country's cheap oil to buy, despite the Western conflict pressure in Ukraine.

China was Russia's largest trading partner, with a US $ 147 billion last year transactions, up 30% compared to 2019.

When the Russian economy began to infuse the Western sanctions, Moscow hurriedly searched for support from allies and partners around the globe.

The talk with the Russian president on the right birthday of China showed that Beijing was ready to support Moscow between pressure from the West.