Mr. Biden came to England to visit the queen

The US President landed in England to prepare for the funeral of Queen Elizabeth II, but canceled the expected meeting with Prime Minister Liz Truss.

Air Force Air Force carrying US President Joe Biden landed at London Stansted airport on the outskirts of England at 22:00 on September 17. 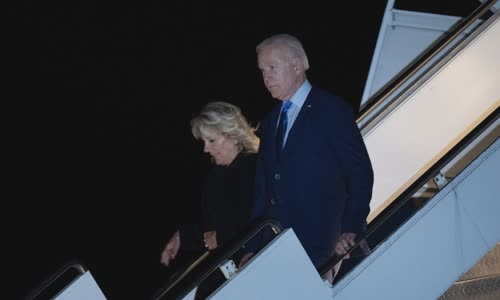 He will visit Queen Elizabeth II and meet King Charles III this morning, before attending the queen's funeral at the Westminster Monastery in London tomorrow.

President Biden and the First Lady left the Special Forces in London on the evening of September 17.

The meeting was planned between the US President and British Prime Minister Liz Truss was canceled for unknown reasons.

Queen Elizabeth II's casket is being crushed in the Westminster hall, in the British National Assembly campus, opened all day and night for the public to visit until the morning of September 19, before being taken to the Westminster Monastery, where the mourning

The British royal family announced the funeral ceremony for Queen Elizabeth II will take place on the afternoon of September 19, before the whole country recited two minutes.

The British royal members accompany Queen Elizabeth II from Buckingham Palace to the Westminster hall, so that the State will take over and organize the national funeral.