Russia said that Biden had to answer whether the US was behind the Nord Stream pipeline leak, mentioning Washington's warning earlier this year.

US President Joe Biden said on February 7 that the Nord Stream 2 pipe would be terminated if Russia attacked Ukraine.

Russian officials also posted on the social network of the video Mr. Biden warned that there would be no Nord Stream 2 pipes if the Russian soldiers and tanks crossed the Ukrainian border.

The gas leaked from Nord Stream 2 pipes off Denmark on September 27.

The Nord Stream 1 and 2 gas pipeline was discovered three gas leaks on September 26. 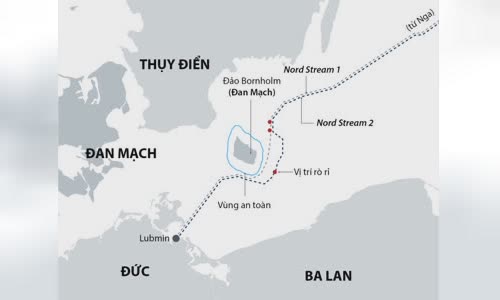 The Nord Stream AG operating unit said the three damaged positions on the same day on the gas pipelines in the Nord Stream system were unprecedented.

Nord Stream 1 is the largest gas pipeline from Russia to Germany through the Baltic Sea, including two pipes running parallel to each side of 27.5 billion m3 per year.

Nord Stream 2 was completed at the end of 2021, almost parallel to Nord Stream 1, designed to transport gas from Russia to Germany through the Baltic Sea without going to Ukraine or Poland, double the supply of magnetic gas.

US Secretary of State said Washington was seeking to ensure energy security for Europe after a series of leaks with Nord Stream pipes.