Two Chinese military aircraft carriers left the port in Shandong and Hainan, between the information that the US House of Representatives could visit Taiwan. 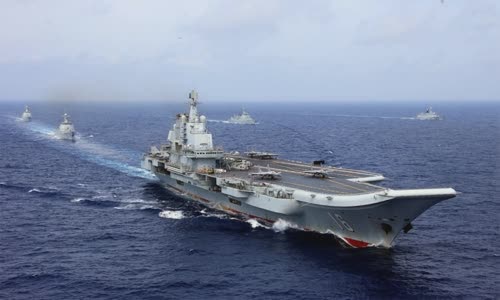 The Global Times satellite photo collected also shows that Liaoning ships are no longer parked in the port, while the Type 075 amphibious ship is facing the East Sea on July 31, while Shandong aircraft carrier on August 1

China Central Television CCTV on August 1 posted a photo of Liaoning aircraft carrier operating at sea when the sailors celebrated the establishment of the Chinese army (PLA).

PLA will conduct more aircraft carriers training in the near future, according to Mr. Tu.

Liaoning aircraft carrier and escorts to rehearse in the western Pacific waters, April 2018.

The operation of two Chinese aircraft carriers took place in the middle of the US media reported that the Chairman of the House of Representatives Nancy Pelosi could visit the island of Taiwan, scheduled to tonight.

The US Ronald Reagan aircraft carrier group also appeared in the southeast of Taiwan Island, according to the US Navy USNI News.

Taiwanese media forecasted that Liaoning Ships could reach the south and Shandong ship to the north, forming a pincer surrounding Taiwan's island to deter Pelosi.

It is unclear whether the Chinese aircraft carrier's activities are related to information about Ms. Pelosi's visit, but the PLA battleship can be used for deterrent purposes, according to an expert's judgment.

The expert added that PLA's aircraft carriers are designed for the purpose of protecting sovereignty, territorial integrity, Chinese national interests, and resolutely implementing the mission when there is a direction.

If Pelosi arrived in Taiwan, this would be the first visit of a US House of Representatives to the island after 25 years.

The Chinese Ministry of Foreign Affairs today announced that Pelosi's script to visit Taiwan was a reckless, provocative act and Washington would have to pay the price.

US Secretary of State Antony Blinken on August 1 called on China to be responsible and did not escalate tensions if the visit took place.