The German cruiser Cap Trafalgar disguised as the British merchant ship and sailed on September 14, 1914, but was not expected to encounter the ship she disguised as soon.

In 1914, shortly after the outbreak of World War I, the German cruiser SMS Cap Trafalgar was converted to impersonate the British armed merchant ship RMS Carmania.

However, its opponent in the first encounter at sea was the real Carmania, leading to a fierce naval battle between two armed passenger ships.

Cap Trafalgar was originally one of the most luxurious passenger ships in the world, was launched on July 31, 2013, 187 meters long, 22 meters wide, has a displacement of 23,640 tons and can carry 1,600 passengers.

When World War I broke out, the German army decided to requisition many commercial ships and convert them into auxiliary cruisers, in order to strengthen the navy's combat forces in a short time.

On 18/8/1914, Cap Trafalgar and the gunboat SMS Eber were taken to Montevideo, Uruguay, for conversion.

The Cap Trafalgar is not the only passenger ship converted to a warship in South America.

While Cap Trafalgar hunts for British cargo ships, Carmania looks for ships to ambush them.

Just a day later, the ship Carmania discovered a column of smoke rising at the port on Trindade Island and guessed the site was a German naval base.

Discovered, the German ship immediately turned to move away from the British ship. 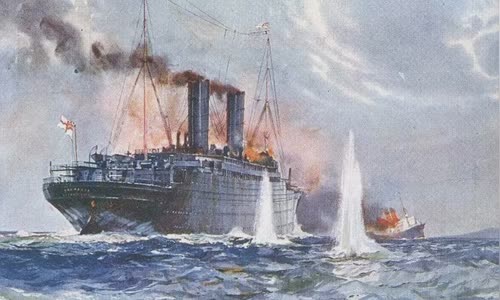 British and German warships began fighting from a distance of 6.5 km.

However, Carmania had an advantage in firepower, being able to fire four 120 mm cannons at the same time, while the German ships could only use one 104 mm gun and three 37 mm automatic guns.

The two ships were moving closer than planned to gain advantage, causing maximum damage to the enemy.

Over the next two hours, the Carmania was hit 79 times, with 304 holes in the body, many of which were below the water level, and the command tower was also completely destroyed by German artillery.

However, the powerful 120 mm cannons on the British warships also caused heavy damage to the enemy.

Sailors on both sides also use rifles and machine guns to shoot at the enemy from a distance of several hundred meters.

Although it was hit with less ammunition, the German ship suffered heavy damage due to a 120 mm shell from the Carmania exploding in the hull, destroying many of the compartments below sea level.

The Carmania was equally damaged when the bow caught fire and all the guns were disabled, and the communication and navigation equipment on the bridge was completely destroyed.