John Churchill, a British lieutenant colonel fighting with a bow and arrow during World War II, said that anyone who goes to battle without a sword is "inadequate."

The life of Churchill, who goes by the nickname "Crazy Jack", has been unusual since his birth in Hong Kong in 1906. Alec Churchill, his father, was appointed Director of Public Affairs in Hong Kong, so 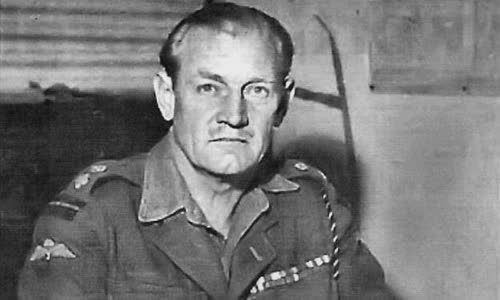 This was the time when Churchill first tasted the feeling of adventure.

Churchill trained at the Royal Military College of England and graduated in 1926, then deployed to Myanmar with the Manchester Regiment.

In 1936, Churchill's desire for adventure grew so great that the army became obligatory.

His archery skills and bagpipe play also helped in his career as an actor.

However, Churchill did not "waste" his talent when he entered an army bagpipe contest and took second place.

After Germany invaded Poland, Churchill decided to put off his adventures and re-enlist, joining the British Expeditionary Force in France.

On May 27, 1940, from a hill in the village of L'Epinette, near Richebourg, France, Churchill and his two comrades watched as five German soldiers approached them less than 27 meters away.

After serving in the British Expeditionary Force, Churchill volunteered to join the Commandos, a special forces unit specialized in raids on occupied German regions in Europe.

Churchill joined the Commandos in fighting throughout Europe, from Norway to Italy or Yugoslavia.

However, Churchill's group in one mission was ambushed, when the Germans fired a mortar, killing all members of the team.

Just a few days after being sent to the concentration camp, "Crazy Jack" and another officer crawled over the barbed wire fence, got through the sewer pipes and escaped.

At the end of April 1945, "Crazy Jack" and about 140 prisoners in the camp were transferred to Tyrol, guarded by a group of SS soldiers.

After receiving the information, Captain Wichard von Alvensleben led a German army unit to protect the group of prisoners and pressured the SS soldiers to leave.

Upon her release, Churchill walked 150 kilometers to Verona, Italy, and met with American troops.

According to his comrades, Churchill was disappointed by the sudden end of the war.

Churchill later moved to Australia and worked as a teacher at the military school there.

In 1959, at the age of 53, Churchill seemed to realize that it was time to slow down, so he decided to leave the army.