The world has recorded more than 29 million infected people, nearly 928,000 people died from nCoV, the epidemic in some countries is at risk of outbreak again. 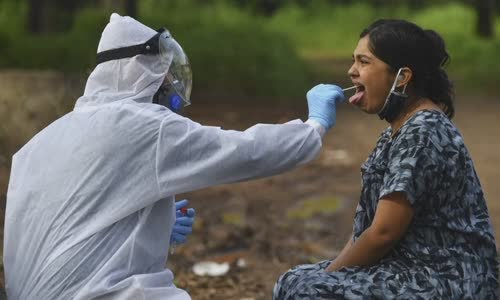 Sampling for testing at an isolation center in Nashik, India, on September 13 Photo: AFP

India, the world's second largest epidemic region and Asia's largest, reported an additional 95,215 cases and 1,140 deaths, bringing the total number of people infected and dying from Covid-19 to 4,845,033 and 79,754, respectively.

The government of Prime Minister Narendra Modi expressed optimism when it said that the rate of people infected with nCoV recovering in India was high, at about 75%.

Brazil, the third largest epidemic region in the world, recorded an additional 351 deaths from Covid-19, bringing the total number of deaths to 131,625.

Brazil's Ministry of Health said the number of nCoV infections in the country has recently decreased slightly and hopes to reach an epidemic peak after months of recording an average daily death of more than 1,000 people.

About 40,000 volunteers in the capital Moscow have been vaccinated with Covid-19 called Sputnik V since September 9, and batches of vaccines were also distributed throughout Russia.

South Africa, the world's eighth largest epidemic region and the country most severely affected by the pandemic in Africa, recorded 649,793 cases and 15,447 deaths, up 1,579 and 20 respectively.

Despite the signs of cooling in Covid-19, South Africa's Health Minister Zweli Mkhize warned the country could face a second outbreak like many countries.

French Prime Minister Jean Castex said on September 11 that the country would not re-impose a national blockade to curb the epidemic, but take other measures such as speeding up testing for priority cases to reduce waiting times.

President Joko Widodo said on September 1 that the epidemic in Indonesia is likely to peak this month, and said "very confident" about the ability to access safe and effective vaccines by the end of the year.

The capital Jakarta re-imposed restrictions on 9/9 when cases increased by an average of 1,000 cases per day this month.

Singapore is the region's third largest outbreak with 57,406 infections, an increase of 49, and 27 deaths.

World Health Organization (WHO) Director-General Tedros Adhanom Ghebreyesus last week warned of a lack of solidarity in the global response to Covid-19.