The danger from the changing rivers

The phenomenon of river changes sometimes harmless but also signaling major changes in the ecosystem, causing a series of unwanted impacts.

About a week now, the Red River water flows through Lao Cai province to transfer colors from chiseled or pink when looking remotely blue when looking from the two shore. 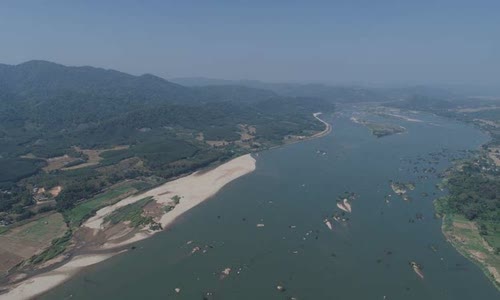 Assoc.Prof.Dr Dao Trong Tu, Chairman of the Vietnam River Network, said that there are two reasons that can lead to the phenomenon of Red River water no longer "pink".

"Another factor that can affect the color of the river water is pollutants from upstream and onshore factories. However, this is only a hypothetical statement. To confirm the cause.

At the end of 2019, the Mekong River also turned green.

The Mekong River at that time was going through one of the worst droughts, causing water level to a record low in at least 60 years.

This means that when sunlight shines down, water drastically absorbs long wavelength colors and produces a greenish color.

In addition, the water in more water facilitates ultra-small plants or algae growing on sand and ice layer under the sediment at the bottom of the river, causing the river water to be blue.

Marc Goichot, high-level advisor in charge of the Mekong River Program of Natural Protection International Fund (WWF) explains that for the Mekong River, green water color is an unusual phenomenon and a bad impact.

Low water levels make it difficult for fishermen and farmers, but experts believe that the decline of alluvials also poses a worrying danger when it can lead to serious banking and riverbed erosion.

Experts and people living along the river say that dams are also contributing to the problem.

The idea of building dams in the lower Mekong River dates back to the Cold War era, when the US, the Soviet Union and China viewed hydroelectricity as a potential strategy for economic development.

But a few years later, MRC changed forecasts, acknowledged the environmental damage with these hydropower dams leaving a greater consequences than any potential of benefits.

In the US, researchers analyzed 235,000 satellite images, taken between 1984 and 2018, from the Aerospace Agency (NASA) and the US Geological Survey's Landsat program.

"Most rivers change gradually and cannot be seen with the naked eye," said John Gardner, lead author of the study from the Global Hydrology Laboratory at the University of North Carolina.

The rivers can carry green, blue, yellow or other colors depending on the amount of sediment accumulation, algae, pollution levels or soluble organic substances in the water.

As a general rule, river water turns green when more algae bloom or when the water carries less sediment.

"Sediments and algae are both important, but too much or too little of them can be disruptive," Gardner said.

In total, researchers observed changes in 34 years over 108,000 km of rivers in the US.

"The tendency to change color to yellow or blue can be worrisome," says Gardner, but adds that the magnitude depends on the river.

Just as leaves turn red or yellow in autumn, rivers may also change color seasonally due to changes in rainfall, melting snow, and other factors that alter flow.

The satellite images also reveal hot spots where human influences, such as dams, reservoirs, agriculture and urban development, can change the color of the river.