Medical experts expressed indignation over Trump's message "don't be afraid of nCoV" when the plague killed more than 215,000 Americans.

Public health experts were hoping that President Donald Trump, who was infected with nCoV and many employees in his administration, would act decisively to convince supporters that wearing masks and keeping the community apart is 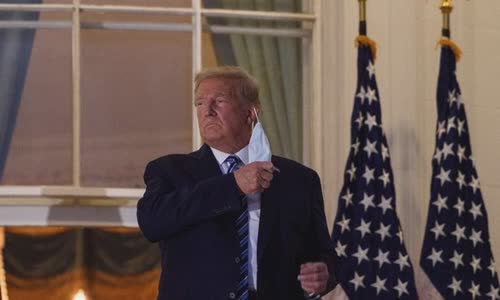 Trump took off his mask after returning to the White House from the Walter Reed National Military Medical Center on October 5 Photo: AFP

Instead, in a October 5 Twitter post from the Walter Reed National Military Medical Center, where Trump was treated for Covid-19, the US President was once again believed to downplay the threat of the virus.

When he got to the White House a few hours later, Trump took off his mask and put it in his pocket before joining a few people wearing them inside.

In the video shot later in the White House, Trump went on to call "don't be afraid of nCoV".

Scientists, ethicists and doctors were indignant at the President's comments.

Dr. William Schaffner, an infectious disease expert at Vanderbilt University School of Medicine, calls the President's message "dangerous" because it encourages his supporters to ignore basic recommendations to keep them safe.

Trump on October 4 left the Walter Reed National Military Medical Center to take a car to wave to supporters gathered outside.

Trump's Twitter post may also lead some to believe that Covid-19 is on the verge of a decline, when in fact the epidemic is largely unregulated in the US and the cases are on the rise, experts say.

Experts point out that Covid-19 has "dominated" the lives of millions of Americans, especially people of color and Latin.

"When you talk to the families in those communities, I certainly have a different perspective on whether this issue is deemed important or not," said Dr. Leon McDougle, president of the Medical Association.

Experts recognize the President's desire to recover the economy, they also warn that until the country controls the virus, people will continue to be infected and attempt to reopen schools, businesses will also

"We understand the economic problems, understand the consequences of the shutdown, but there must be a coordinated response so that it doesn't have to dominate our lives," said Rajesh Gandhi, infectious disease doctor at the School of Medicine.

After four days of treatment at the military medical center, Trump said he felt better "compared to 20 years ago".

Unlike ordinary people in the US, in which many are not tested for Covid-19 or receive hospital care due to overcrowding, the President has a full, dedicated team of specialists at Walter Reed.

For the unfortunate patients, the President's message was seen as "sad".

"His message irritates me. The president can check himself and has a team of 14 doctors. Most of us can't find a doctor to listen to," said English, 46, mother

English is still in the state of fatigue, nausea, vomiting, poor eyesight and drowsiness.