The oldest veteran in the United States welcomes his 111th birthday

Old Lawrence Brooks, the oldest veteran ever to participate in World War II, celebrated his 111th birthday on his porch in New Orleans yesterday. 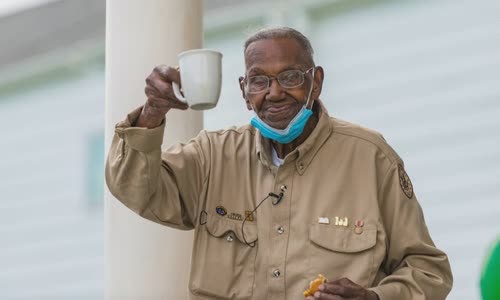 The World War II Museum celebrated Mr. Brooks' previous five birthdays on the museum grounds, however, this year they had to adjust their organization for Covid-19.

The museum previously launched a birthday greeting program for Mr. Brook in hopes of getting 500 to 1,000 greeting cards.

"It's an honor to have one of the oldest World War II veterans living near us and it makes sense to continue to celebrate Brooks this year safely," says Amber Mitchell,

Mr. Lawrence Brooks was born in 1909 and served in the 91st Engineering Battalion, mainly African-American members, stationed in New Guinea before moving to the Philippines during World War II.

In a 2014 interview with the museum, Brooks said he nearly died when his C-47 transport plane loaded with barbed wire died an engine.