China puts hundreds of ships anchored at the reef in the South China Sea, which seems to explore how toughly react to Biden.

More information about 200 Chinese fishing vessels anchoring at the reef near the existent island of the Spratly Islands of the Spratly of Vietnam in the East Sea are announced by the Philippines last month. 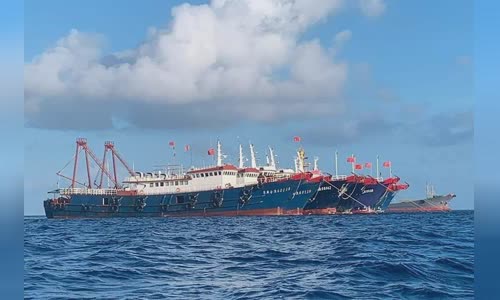 However, two weeks later, more than 40 Chinese vessels still anchored in this reef with a silent sea, and the announcements from Beijing was getting briefly.

"I'm not a fool. The recent weather is still good so they have no reason to continue there. They have to leave," the Philippines Definition Defin Lorenzana said on April 3.

The experts of this action are in China's "gray" tactics, which means using the military force conducting provocative activities under the military conflict, to appropriate the island waters

"Nobody to the ship 'shelter' in the storm area a few weeks before a storm. If it is really a commercial fishing vessel, the anchor in such a place will cause hundreds, if not to say

According to the commentators Andeo Calonzo and Philip Hejimans of Bloomberg, this move shows that China seems to be looking for a way to explore the US President Joe Biden will take any action, after the White House boss claims to strengthen

In 2012, China used to conduct a similar move at Scarborough Shanges when deploying marine vessels to the region, resulting in 10 weeks confronting the Philippines Navy.

"This is a try to see what the Biden government is ready to do. How America's response will determine the next test. Until now, everything Washington has done much more saying," Schuster commented

American National Security Advisor Jake Sullivan and the Philippine Hermogenes Esperon office on March 31 discussed the presence of Chinese vessels, agreed that the two sides "will continue to work closely to respond to challenges

Sullivan confirmed the United States "always close to the Philippines", and accused China to "use marine militants to provoke and threaten other countries."

On April 5, usni News reported the US aircraft carrier combat team USS Theodore Roosevelt crossed Malacca Strait, entered the East Sea and was in the area off Malaysia, after rehearsing with the Indian Navy last week.

However, Bloomberg's comments show a big problem for Washington to determine the level of response to Beijing.

However, if not act, the Biden government image can become weak before China.

The Biden administration reaffirmed to be assumed if the Philippines was attacked on the East Sea, under the General Defense Treaty between the two countries.

Rommel Ong, former standard Admiral Philippines, said that the navy of the country will be "tied up with the hands" under Duterte.

The Philippine officials have spoken about the appearance of large quantities of Chinese ships with a strong rated language, but Duterte so far still remains silent, although his spokesman Harry Roque said the point of view

"President's view is that we will protect your rights, but this is not a reason to use violence. He believes with close relations between us and China, we can solve

Observers identifying the need to ensure the supply of Vaccine Covid-19 can be a factor that prevents Duterte that gives a tougher stance, in the context of the capital of Manila, it is once again blockade between a bad outbreak

Shahriman Lockman, a senior analyst at the Institute of Strategy and International Studies in Malaysia, this Review this time will be "not too naive" after the mistake in 2012 at Scarborough shuttle, capital "causes serious damage

"Americans are involved in things cautiously. They have not yet been clearly blamed because it makes the situation escalate or not. That ability can really happen with erratic leaders in Manila